Life In The RV Update

Just about seven months now that we have been living in our Ci Ci Blue. As you have read we have had some large and some small repairs as we traveled. So how do I like it?

I love the compactness of the RV believe it or not. I'm finished doing "housework" in about a half hour. The washer/dryer could be a bit larger but it's great for doing a quick load every now and then. Well, not so quick but where are we going? The days fly by. With walking the dogs about three times a day it seems we get up and then it's time to go to bed. (Note to self, get up earlier in the day)

The Holidays! We decided to stay at Crystal Lake RV Park til the end of March. Our spot is perfect, front row looking out to the Lake. At dusk we watch the egrets fly back in for the night, landing in their favorite tree. They switch positions every once in awhile til they get that "perfect" branch.

We had Thanksgiving at the rec hall with as I say, 20 of our closest "strangers". Our son and family came so it was a good day. My friend was rained out from a weeks worth of rain here and it was all mud.  There are a lot of full time people who have been doing this for years. They had their sectional RV trays and some, paper plates. Easier for travel. We had ceramic dishes. That night it hit me how different life had become after 20 years with Roger and the great holiday traditions of white table cloths and candlelight, I sobbed.

During the week a group of woman here and I painted more gourds and I told them my tale of woe. Haha. That's when they shared their own sobbing times after they first started RV'ing full time. "Do what makes you happy" they said. "Bring what you need to make your day special."  So for Christmas, Wendy, the owner said we'd have candles on all the tables and bring what ever you need to make the day special"

Funny, a few people left here for another RV park because it had nice tile in the bathrooms, cost less and a "nice" rec hall. They are jammed in so close you can hear your neighbor clear their throat silently. If you get my drift. What we have here is space between rigs, a rec hall, there is tile in the bathrooms, hahaha, but most of all we have a group of people who truly care. 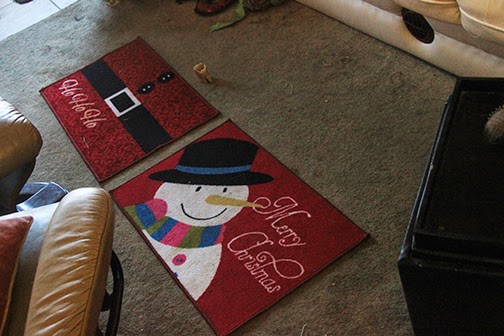 Roger got these the other day, to hide the yucky rug, but also to cheer me up. We have gold glittery rope to hang along the moulding later today.

A older couple came in the other day and pulled in beside us, drivers side,in their Fifth wheel. I park my jeep in front of our coach on that side also. He was getting ready to leave and started banging on our door yelling, "Move your car, I can't get around it". I tried but the battery is totally dead. The man turned from somewhat polite to a crazed man in front of me finally going up to the office to complain I was parking on his site. I followed just in time to hear him tell Wendy that, "the Yahoos next to me...) (him) were parked on his site and he couldn't get out. I waved to Wendy and told her yes, I was the Yahoo.

Short story, after about a half hour of him grumping and growling, Roger taking the dogs to the park to get out of the firing range, hahaha, he left perfectly. Didn't drive into the soft mud to get stuck forever and off he went telling Wendy he'd never come back here.  Now, besides having the Boston accent, Wendy drives by in her golf cart and as she passes I hear.."Ya-hooooooooo".  The man probably just got the rig and was unsure or how to drive it but we did see his wife rolling her eyes and saying, Oh Noo.  I guess we may run into grumpy people out there but there is an easier way of dealing with things. Our friend Larry is going to try and find me a cheap battery since we hope to trade the cars in in january and get something newer and smaller to tow.

Is Mercury back in retrograde?? 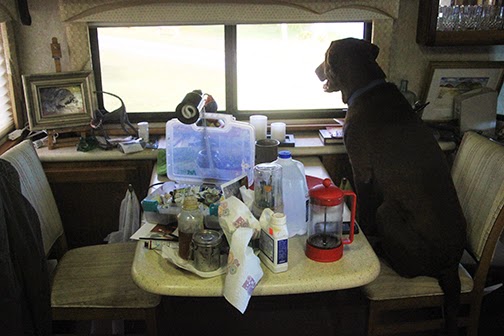 Still trying to get accustomed to a smaller space for painting. Roger just bought me a metal field easel to work on larger canvas. (I got the two day shipping so I can get it right away. ) 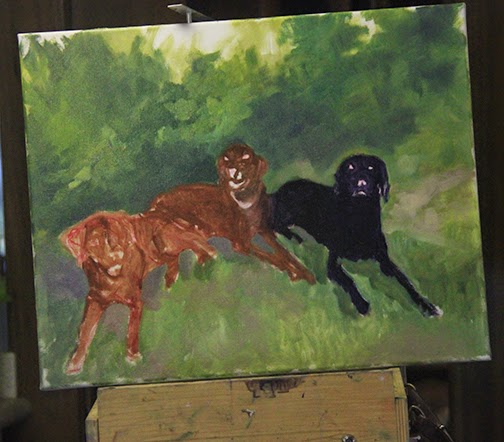 This was the "in Progress" shot but it's now almost finished. A Christmas commission. It's a 16" x 20" and I'm using my paint box. As you see a slight tilt. Now I'm working on two 18" x 24" so I'm thrilled the new easel will be here Tuesday so I can finish them. (You will see those after the Holiday)

My son ,Jamie, was concerned that I walk three large dogs. He's 42 and has started to feel pain in his knees so probably figured since I am a few years older, ;-) , I would be getting aches and pains even more. He dropped by the other day and I told him this. Before we had the rv I had trouble walking. From standing painting for all these long years, my right shoulder had frozen and was always in pain and hard to move. My back always hurt and my knees I thought were shot. After the first maybe three months, visits to my wonderful massage therapist, Lola pulling me in different directions, climbing in and out of the RV, Sammy going in the opposite direction thus pulling my right arm back, walking fast with the dogs, I can honestly say I'm in better shape now than I was 8 months ago!! And, I've lost weight!! I ride my bike around the park everyday a few times feeling quite like Dorothy in the Wizard of Oz. Or maybe the Witch!!! Hahaha.

We realized we have Coach.net. It's AAA for RV's. We can call them next week since we are quite dead here in the park and have them come out and replace our Chassis battery. It's important to run the engine every so often. So many things to remember...!

Ok, that's it for today. Have a great night and if anything exciting happens tomorrow I'll be back!!! See you then.