Life In Back Mountain Country And It's Mating Season

That's what I saw on the sign..Back Mountain country and that's us. The road in is 10 miles but to me it's the scariest road I've ever been on and it takes about 25 to 30 minutes to do the 10 miles. We are isolated and yes it is taking time to get accustomed to it. I like being able to jump in the car and drive to someplace quick but here you really need to plan because it's a days outing. I thought I always wanted to boon dock and be totally away from civilization and maybe it's different being out there but here I'm in close proximity to a lot of new friends. So, maybe it's not isolation I'm feeling but claustrophobia. haha. 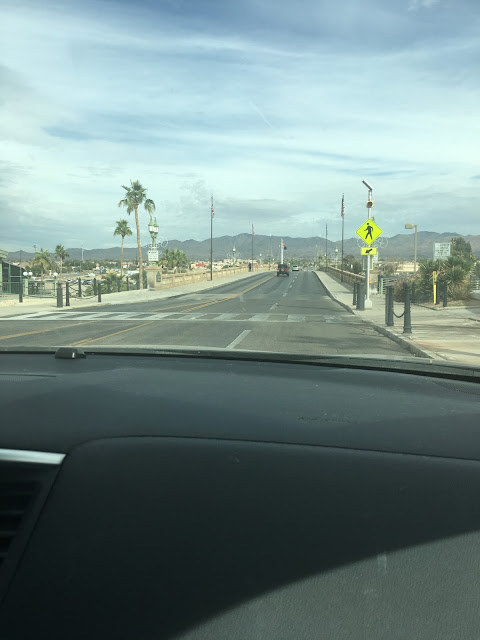 We drove to Parker Dam the other day to ship some artwork. Parker Dam is at the end of the 10 mile road from the campground and has a small post office, open from 10 A.M. to 2 P.M.  We left here at 9:30 and actually arrived a little after 10 and couldn't figure out why it had not been opened. Ok, here's where it gets a bit crazy. In the campground we go by Arizona time. A 2 hour difference right now from the east coast, friends and family, however, Parker Dam goes by California time, the 3:00 hour time difference. Packages in hand we went back to the car and crossed the Dam and drove up to Lake Havasu City, about 35 to 45 minutes on 95 North. They have a larger post office and we needed to do some shopping for provisions. (Provisions because we don't go that often..haha)

We then started our travel back and forgot there was no left turn on to 95 south after coming out of Safeway. Take note! Actually it was a bit fun because we got to cross over the London Bridge. Not THE London Bridge but a London Bridge that a man purchased and rebuilt. On the other side there is not much of anything so we turn around and voila'..we drive over it once more.

You may remember when we first arrived we were in the cheap seats of the park. Our choice but not realizing there was no cell reception due to the mountains on either side and we decided to move down to row B, second row from the Lake.

Before at least 50 of our new friends moved in. 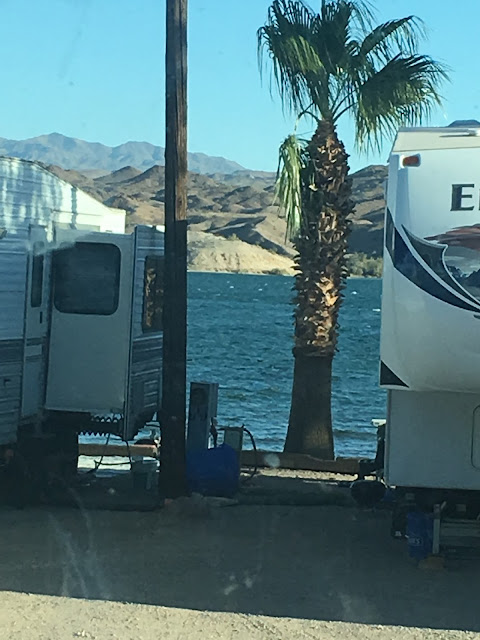 I cherish this view. Morning coffee in the drivers seat!

So, on our way to row B, Roger took a left hand turn and the sewer bay door was attacked by a huge boulder and really scrunched up the whole door, so much so I couldn't even take a photo of it and maybe only one person heard the story. I couldn't stay upset because poor Roger drove from Florida to New Hampshire then from there to California. A great job. Our friends Betty and Bob next to us and with who we traveled with said, hey, we can fix that.

They took took the crumpled door off and went beyond the gate and Bob pounded away. 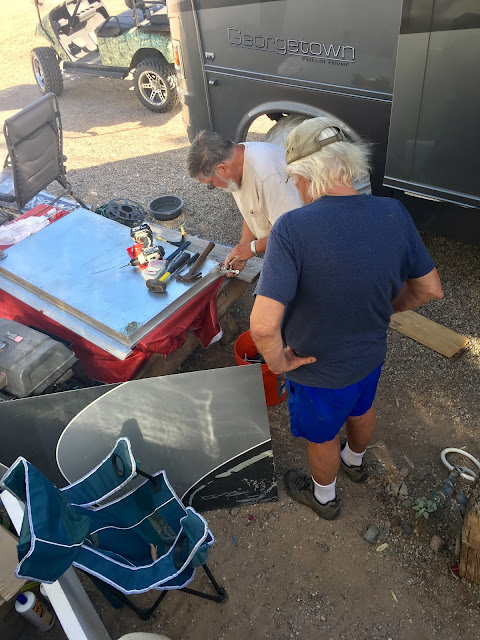 They hung it to make sure it would actually hang correctly. At this point I was happy and figured I could get paint and go over the scratches and at 55, 60 MPH, who will see poor CiCi Blues bumps. A line went straight up just past the door latch and that whole corner folded up. It was so sad. 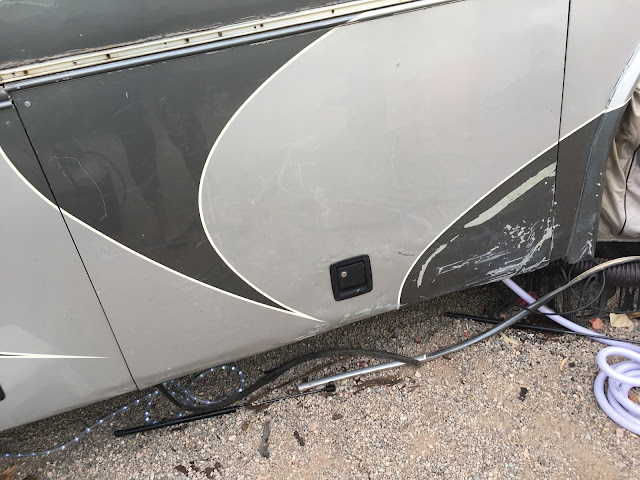 On our trip to Lake Havasu City the other day we bought a electric sander and packages of different sand paper plus a quart of Bondo, oh and an assortment of plastic putty knives. 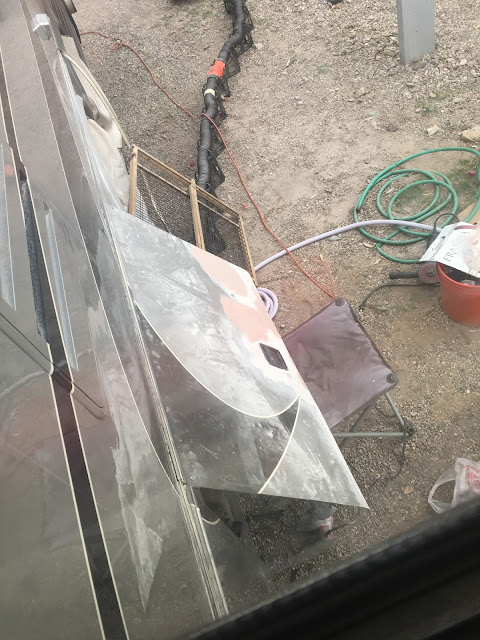 I guess I missed the conversation when Bob told us he did body work with his brother for a living for years. The outside panel wasn't adhering to the back insulated part of the door so Bob put in small rivets and is covering them with bondo. Also covering and smoothing the "yucky" parts. I have the codes for CiCiBlue's paint so I called Country Coach in Oregon and asked then if they sold paint. They do sell touch up paint but I would have had to buy bulk for this job. After explaining the whole ordeal the woman told me to take the codes to a body shop and they could duplicate the colors.

Yes, I am overwhelmed and floored! And did I mention speechless. I'll keep you posted.

Happy hour is around 3:30 P.M. now due to the sunset coming in earlier everynight. We meet at Bob and Betty's next to us and I "hide" under their slide out so Lola can't see me and start calling me to come home. Our friends Paul and Diane join us. Last evening Diane leaned forward and calmly said, "Sheila, come out here, something is crawling just behind you". I wanted to panic, thinking oh lord, spider, so I very slowly got up and went out behind the group, then turned to see what was crawling. A Tarantula! He was coming under their rig full force towards us. Bob grabbed a broom and started to whisk him away. The Tarantula reared up on his hind legs and was ready for a fight. Bob and Betty have an adorable Labradoodle, Snoop, who sits out with us and the fear was Snoop would go after the Tarantula. They bite and hurt and they can turn quickly and have needles they jet out. Not very sure about that part, I'll do more research but they shoot out something that would stick in Snoops nose for sure. I grabbed my phone quickly and Googled if they are endangered and poisonous and read mating season in Fall and Spring and if you see quarter size holes under rocks you have found their homes.

Just then two women we know came down carrying their small dog yelling, "Tarantulas" They had come upon them too. Tarantulas come out at night and on our walk I saw holes under every boulder on the grassy area.  And yes, Laying in bed my thoughts turned into a Japanese monster movie with tarantulas roaming everywhere until dawn.

The Santa Anna winds came in last night and rocked and rolled us til dawn. It's still cold and blustery out but not as bad as the 40-50 MPH gusts we had during the night. It will slow down about 8:00 P.M. tonight and be a calmer night wind.

You can spot the white caps out on the Lake. 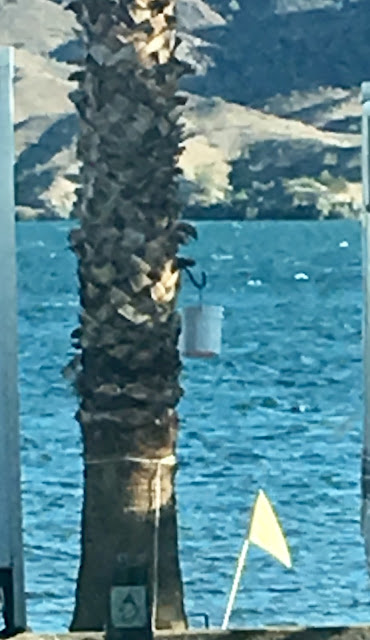 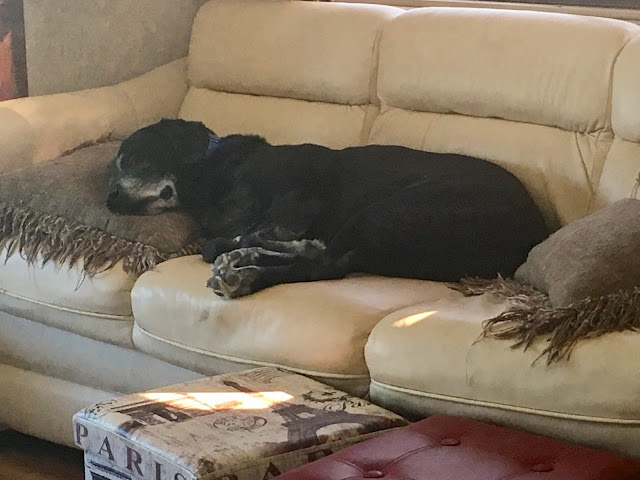 And when the wind is howling and the coach is rocking, this is what one does.

Have a great night all and see you tomorrow. (Lord, I'm such a city girl..hahah)

Posted by Sheila Wedegis at 4:19 PM