Well it's over. Lola's Spa Day! Carrie was a bit late due to really strong storms in south Brevard County but we were outside and ready when she arrived.  I motioned to her to drive around to the rear of the coach and she did. 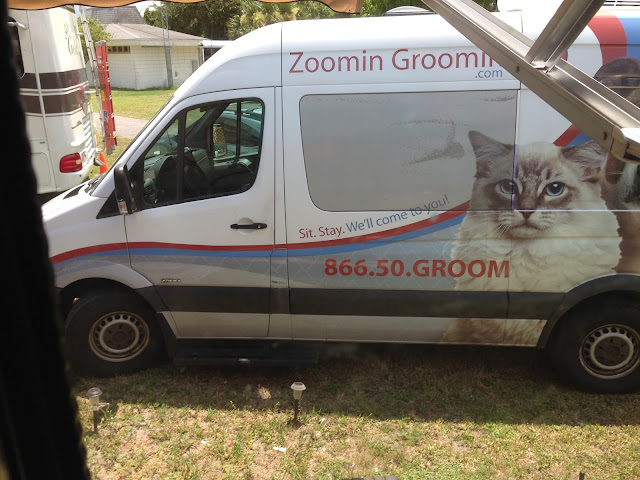 Carrie came out and Lola wanted back into the coach.  Not sure if she remembered the last Spa Day but she wasn't excited at all to go into that van.  Poor girl. But, in she went.  I had a photo of what I wanted Lola to look like when she was finished and Carrie copied it onto her phone. 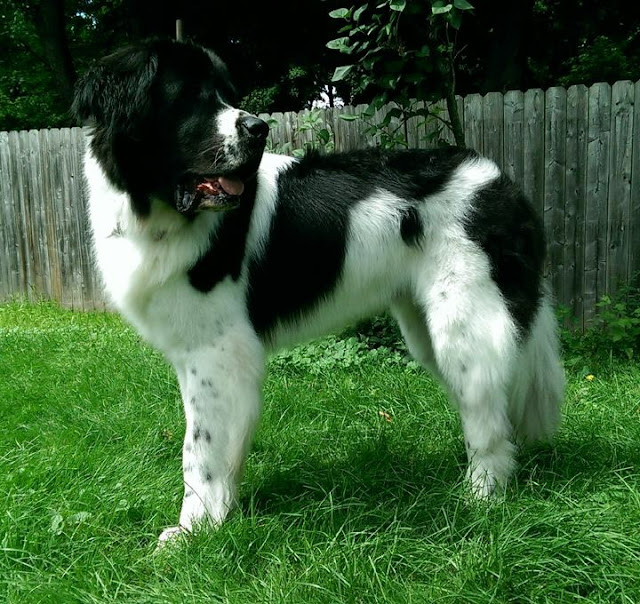 I thought it was a good example if I say so myself. Lola has some nasty mats that seemed to come overnight with her, so they had to be addressed. "No problem", Carrie said and off they went.

It seemed like forever waiting for Lola to come back out.  Loving an animal is no different, you worry, you pace and keep an eye out the window for the return. I'm surprised I didn't put a light in the window.!  Then, 3 1/2 hours later the emergence!

Lola bolted out the door with Carrie following her carrying the hose to blow off residual hair but Lola just wanted to get home.  As we approached the door of the RV, Lola plastered her face against it as if she would be able to meld right into it and be inside.  I had been concerned, silly me, that her new appearance would make the boys wary. Ha! They greeted her with love and open nostrils! 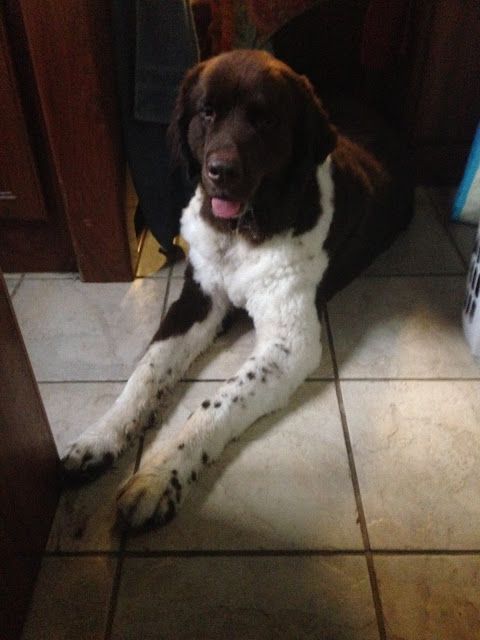 Then, since it was after their 4 P.M. park time and after their dinner time, we decided to take them to the park.  I took them down and Lola ran and ran and ran. She jumped on Sammy who chased her, then went after Ozzie who tipped her over and jumped on her. (Yes, he thought she was hot!!!) Dogs! After I panicked that she would get dirty so quick after her bath, called them and we marched home.

Her cut may be a smidge too short and some areas need to grow back in quicker than others but all in all she looks great and seems to be enjoying the shorter doo.  (And I have less dog hair to sweep up.) It will definitely be easier to keep her groomed as the hair starts to grow back out and I will be able to trim it. 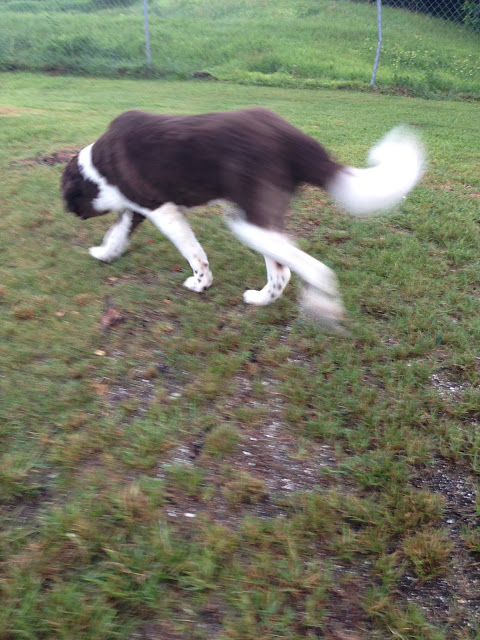 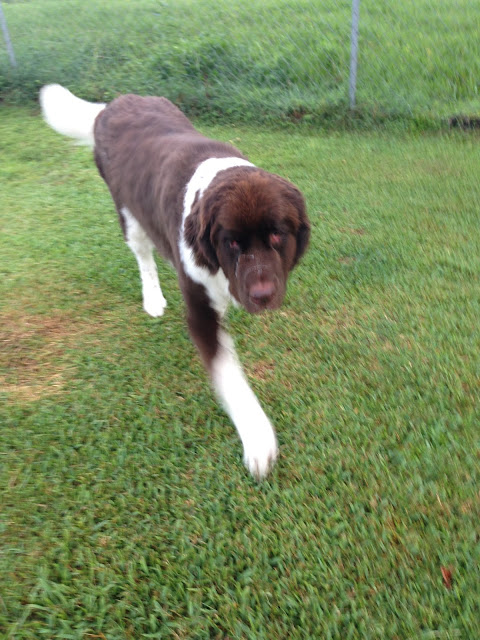 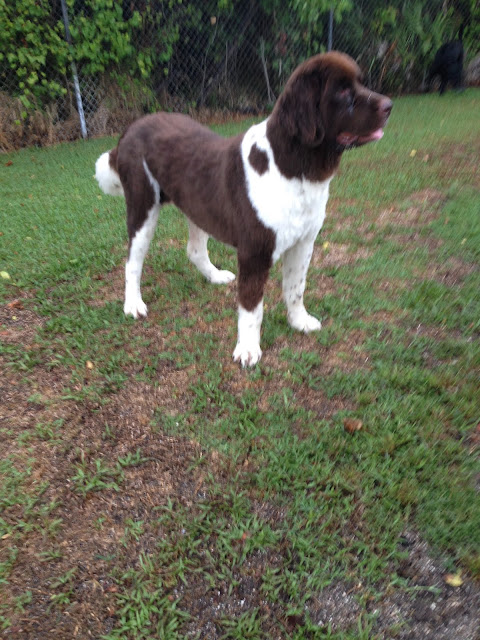 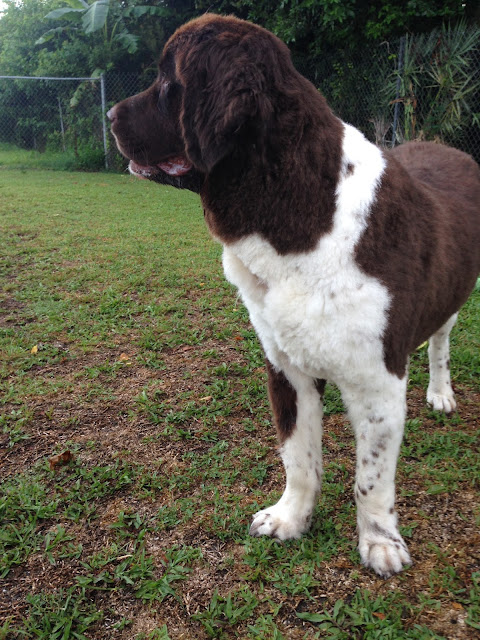 An added bonus too is that I get to see where she needs to loose a bit of weight around her middle. Not too much but she needs to have a "waist" as you look down at her back from above her. There is a little pudge but not much. I've been feeding her less and it's paying off. My fuzzy love girl! 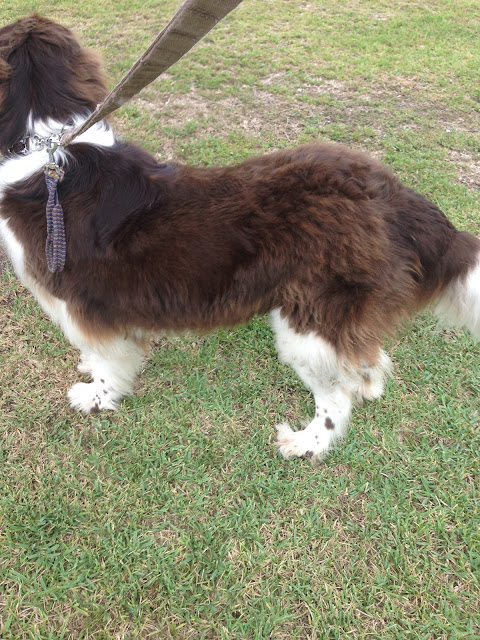 The before shot. That rear end one big mass of blow out fur. I had been combing and furminating, but oh my, it needed help. Now she is soft and happy.

This morning Roger took them all to the park for their morning romp. Lola played and played then came home, looked for me and then laid down on the floor. She panted for a bit then took her morning nap. Before she panted for hours.  I know she is so much cooler. Now I need to keep an eye on her so she doesn't get sunburned but since I rarely go out during this heat neither will she. All is good!!

Have a great day!!