The RV repair guys came today!! I know, you have heard it all before but they got our awnings all fixed. 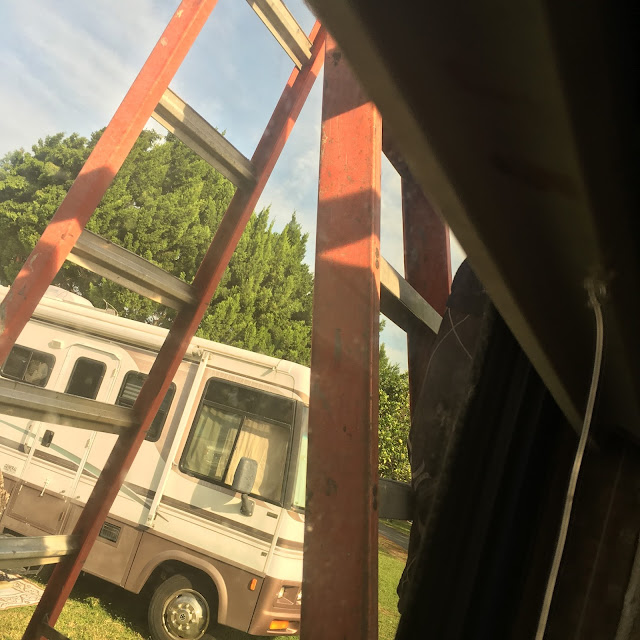 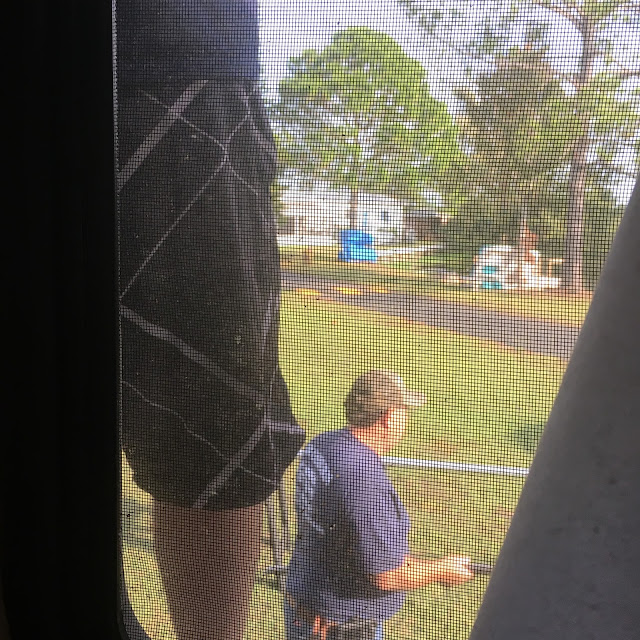 The RV repair guys came!! They cut the lengths of pole to fit the size of our awnings, placed them on the arm extensions and voila'..fixed. 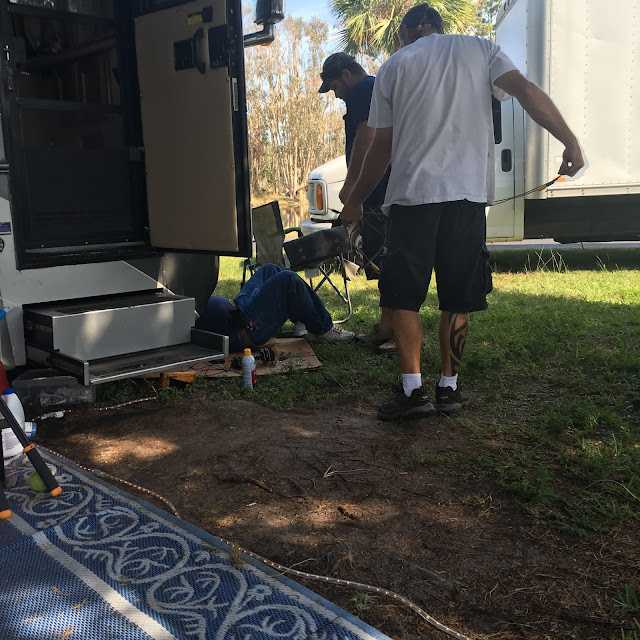 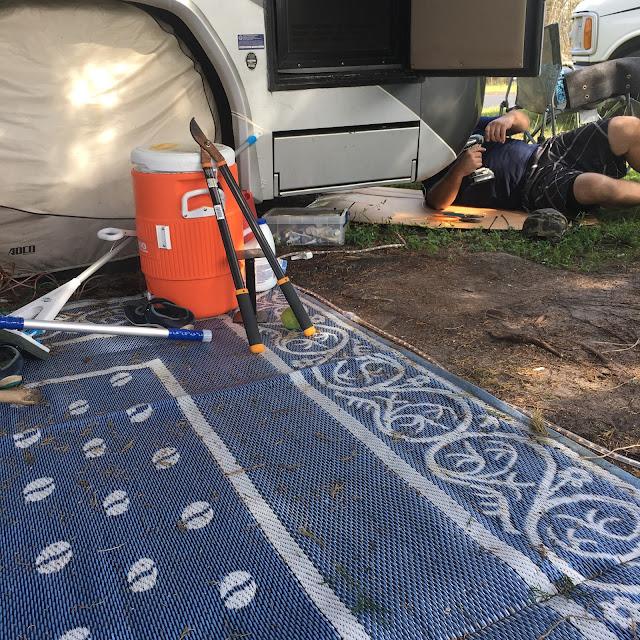 Our stairs have been a constant problem as you have heard. They stopped working then a new motor was placed in. Then they wouldn't go in and out so a new hole was made in the doorway for a device that would have the stairs go in or out, then stay out while we were parked. The device broke as he was installing it so a new one had to be ordered. Today was the day!!! The hole was drilled a bit larger, the wires attached, the switched on the console switched to on then the moment of truth. The stairs went out then they came in.  Then I saw every one's face.  The stairs go out but will not stay there. They will however, stay shut.  Wires changed, tried again, nothing changed. So our stairs are now once again out permanently until they call Kwikee to find out what they need to do. At least we aren't going any where right now. 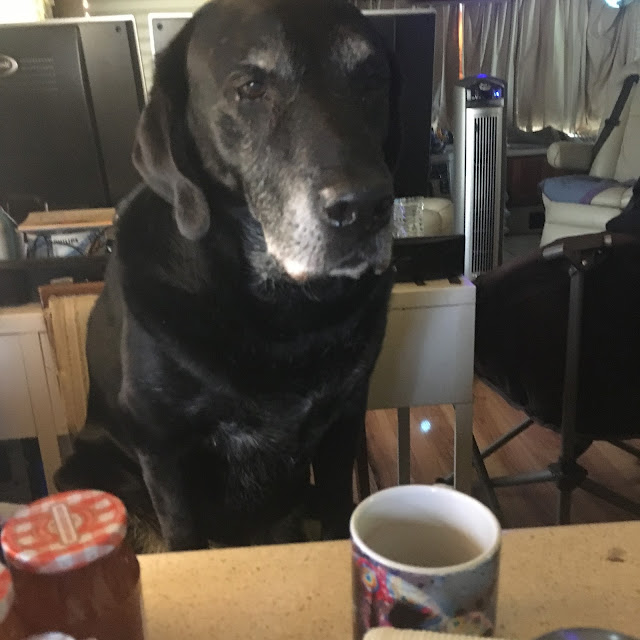 "So Sam, what do you think will happen?"  "You think I should have another cup of coffee?..I'm with you bud!!" 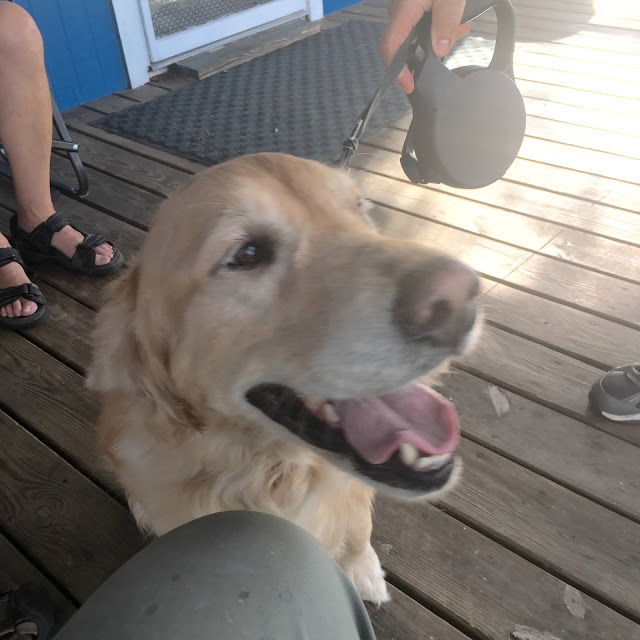 This is Izzy! A beautiful 2 year old Golden Retriever that lives next door to us. She has a sister ,same age, and the other evening their Mum invited Lola and I to go play in the dog park together.  I was nervous, since I didn't know what Lola would be like but as we approached she was so excited, we went in. They played great together and I was thrilled. Lola made friends. She did run over to me and sit by me every so often, probably overwhelmed at her new playmates.  They leave tomorrow but I'm sure we will meet up again at some time. 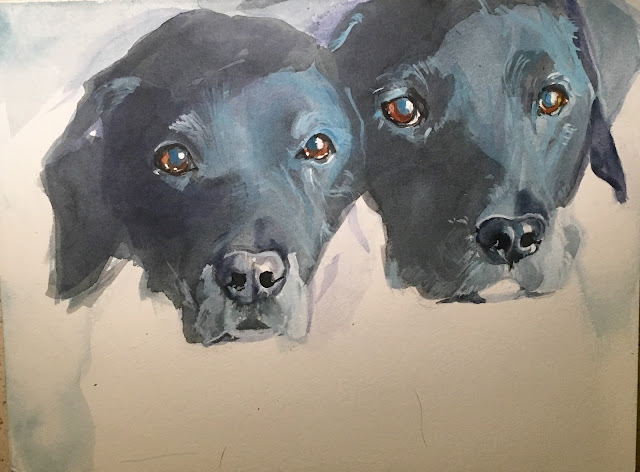 And finally, a watercolor piece I am currently working on. Two wee beauties who live in Scotland. Their Mum takes oodles of photos and I "steal" them to capture in paint.  Almost finished, I need to put in some darks and lights and hopefully it will all work! I'll show you the finished piece tomorrow..


So have a great night and stay safe.

Posted by Sheila Wedegis at 7:57 PM