We try and do a fun thing once or twice a week to see the area we are staying in. The other days I'm painting. The decision was a town named Bisbee. An old town similar to Tombstone, being a mining community during the 1800's then closing and then once again opening in the 50,s before closing once again. They did strip mining for copper and since I love painting on copper this was cool to see one of their mines. 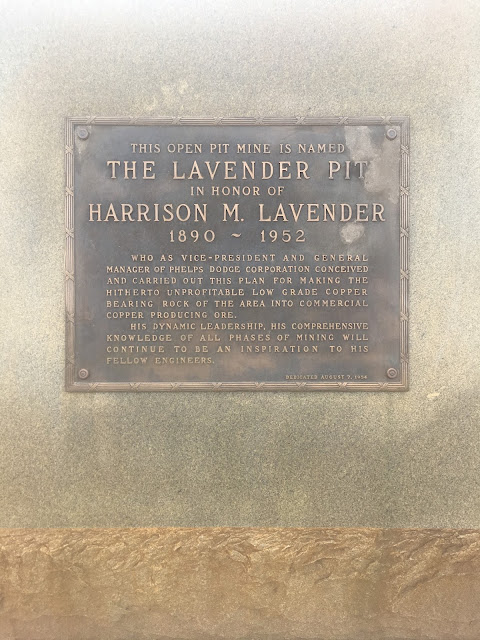 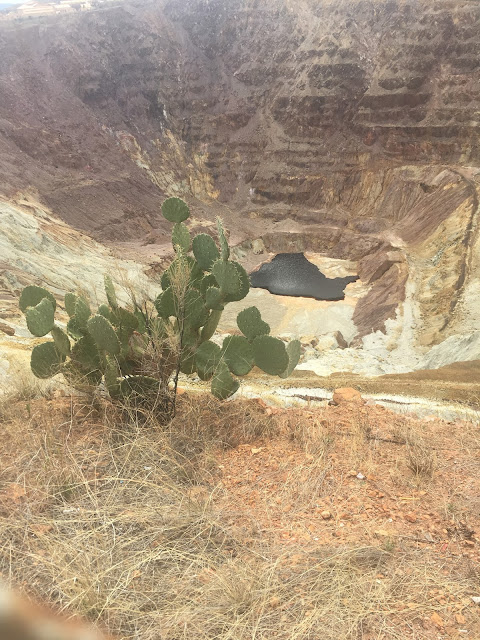 The mine is surrounded by a chain link fence with areas cut out so one can take photos. I first saw the cactus and loved that, then, saw how deep this strip mine was and water waaaayyyyy down below. The access ore was dumped on the surrounding hills which gives them the bright orange shade. It was getting cloudy and my cell phone didn't quite get the intense color but it was beautiful. 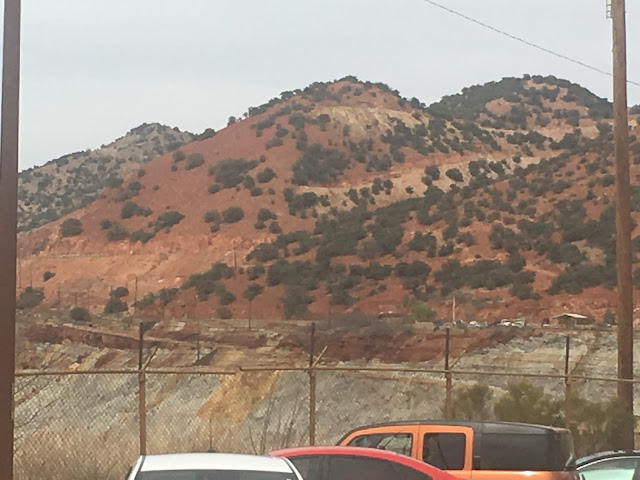 Then we drove along the road into a town named Lowell. The main street has been left as if it was the 50's. Stores are empty but the store windows still show what was happening back then. 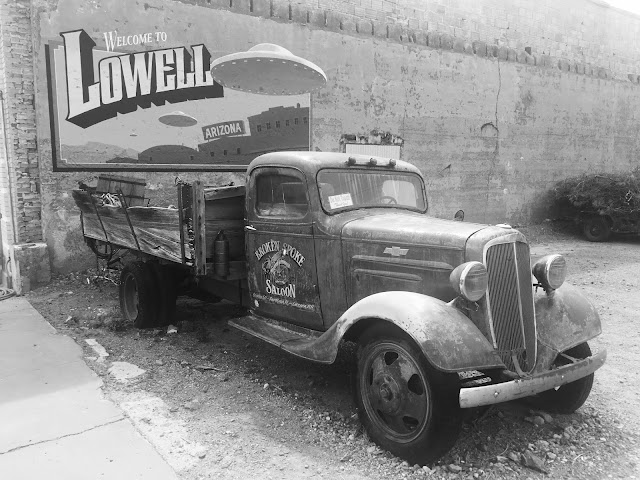 It had to be in black and white! Not sure really why space ships seem to be on signs around this area, I'll have to look it up but maybe they are suggesting that aliens took everyone from that town in Lowell. LOL.

One of the windows was a showcase  of old Harley Davidson's. In an "other life time" the person I was with had a '58 Pan head. I had to take this photo. The one I rode on was a red and white and I could actually kick start it which was always a fun thing because back then only the "guys" did that. 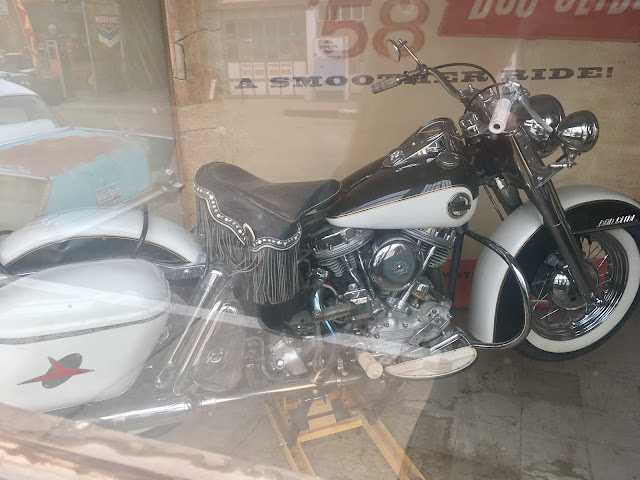 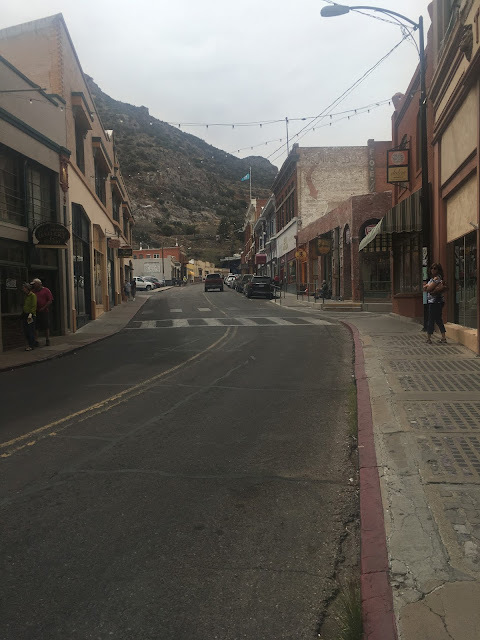 From there it's a short hop to Bisbee itself. The entire town is on a hill and stairs going up are everywhere.  Bisbee  Quaint with fun shops along the "main drag" . First stop was of course, a restroom. Then, lunch. 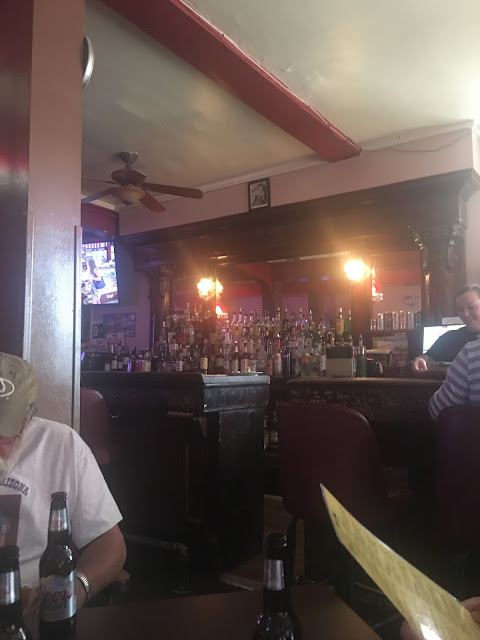 We chose the Copper Queen Hotel Saloon for our first stop. It's known as the longest operating hotel in Arizona and has legends of ghosts through out the hotel. Built between 1898 and 1902.  I kept the image as dark as it was in the saloon so you get the whole feel. You gave your order up at the bar and after you ate, dropped your dishes there too. Food was good then we were off once again. 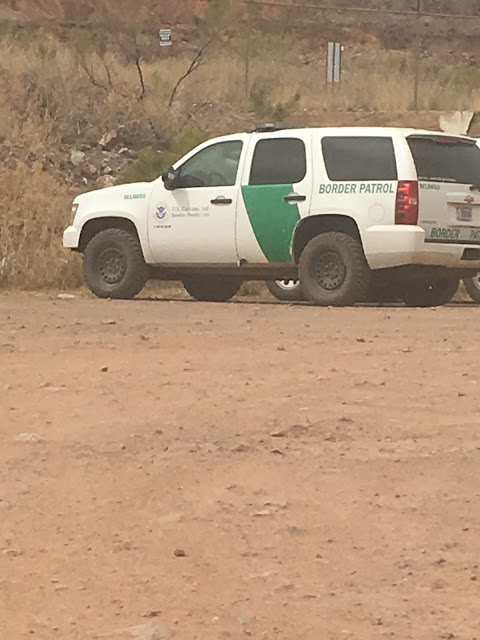 We are close to the Mexican border so seeing Border Patrol everywhere is quite common, along with check points every so often. 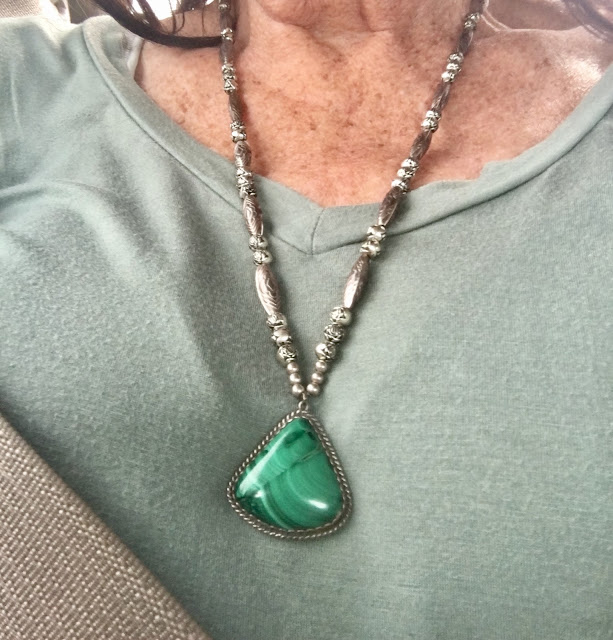 The shops in Bisbee are eclectic to say the least. I love vintage shops and Bisbee has quite a few. We were there on March 14 and since my birthday two days off, I found this and Roger got it for my day! 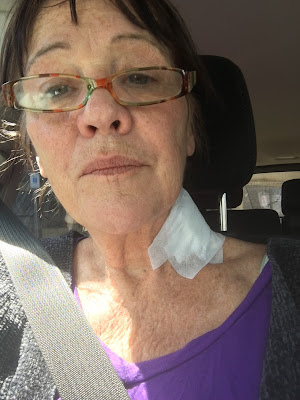 March 15 was Moh's surgery for a basal cell carcinoma on my neck. The word, cancer, is scary but thankfully basal cell is easily treatable and not an invasive metastasizing cancer. It will, if left untreated, grow deep roots and enlarge so that treatment is a bit more invasive on your body.  Moh's was named after a general surgeon in 1938 who invented this surgery that is microscopic taking the least amount of good tissue and is done in the office in one day. One leaves knowing you are cancer free. Totally numbed from my ear to my shoulder I never felt a thing but you are looking at one tired puppy. I came home, crawled into bed and slept soundly for hours.

So, we catch up to present day and yesterday our adventure took us to a completely different view on Arizona! We drove over to Elgin, AZ. and the wineries.  All the wineries  We went from desert land to hills and mountains and sweeping plains. I totally fell in love. For fun I looked up the price of homes in that area last night... deer in headlight look here.. 500 hundred K to above. Now that's a lot of paintings! We did learn that many films were made in this area one of them being "Oklahoma". Who knew?! 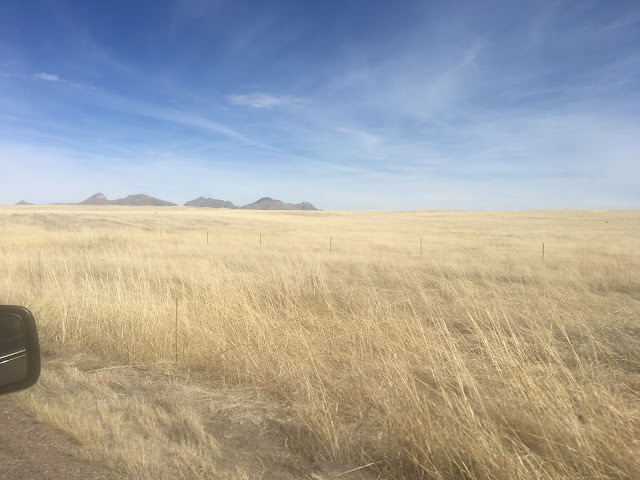 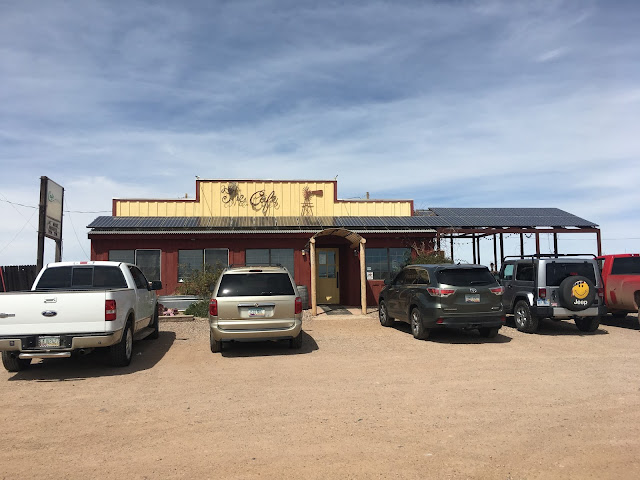 Stopped for lunch here. The chef is remarkable and the food was amazing.

Looking across the street this is what you see. Awesome. 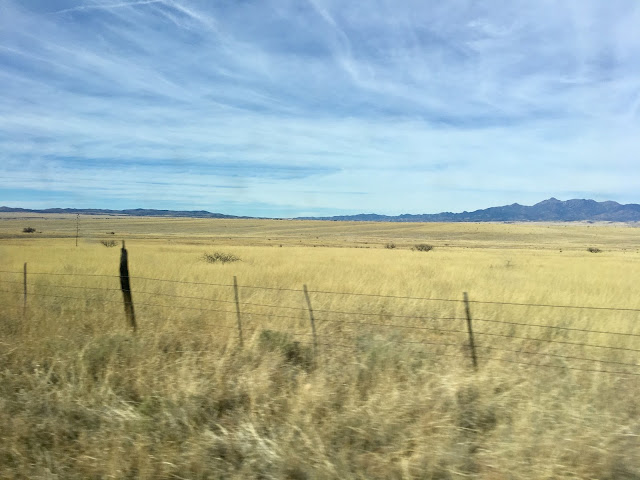 Earlier, around 11 A.M. the wineries open so on our second winery was Kief-Joshua Vineyards. Kief-Joshua. We were having 6 tastes at this particular winery and then my attention switched suddenly. 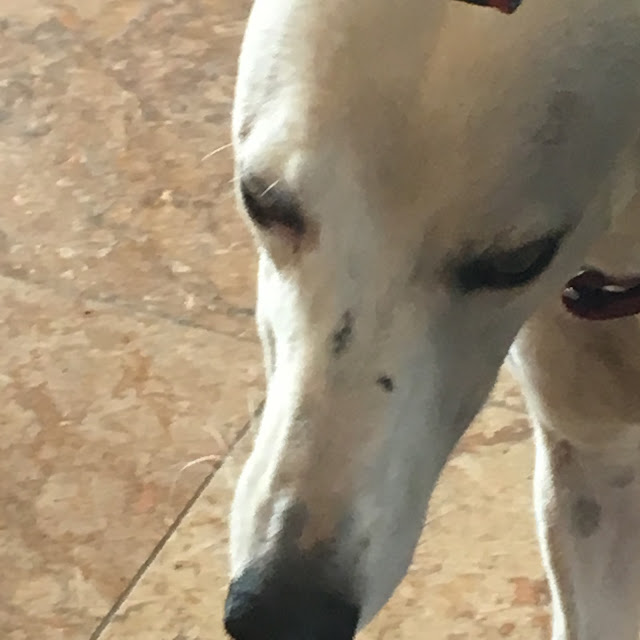 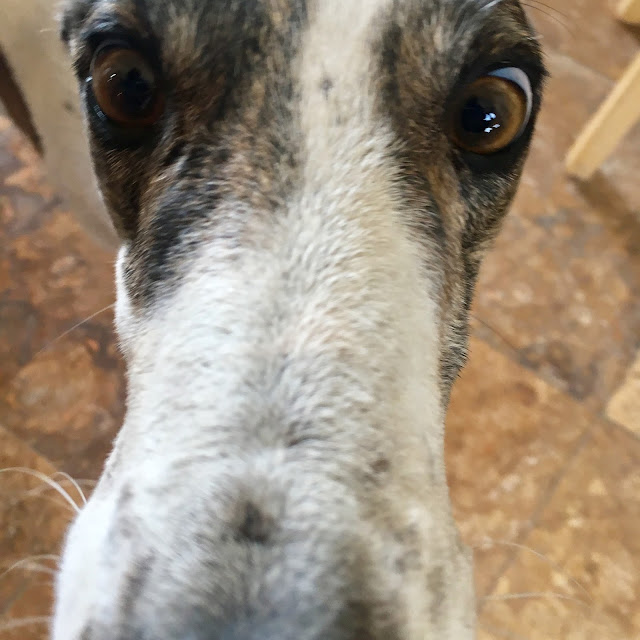 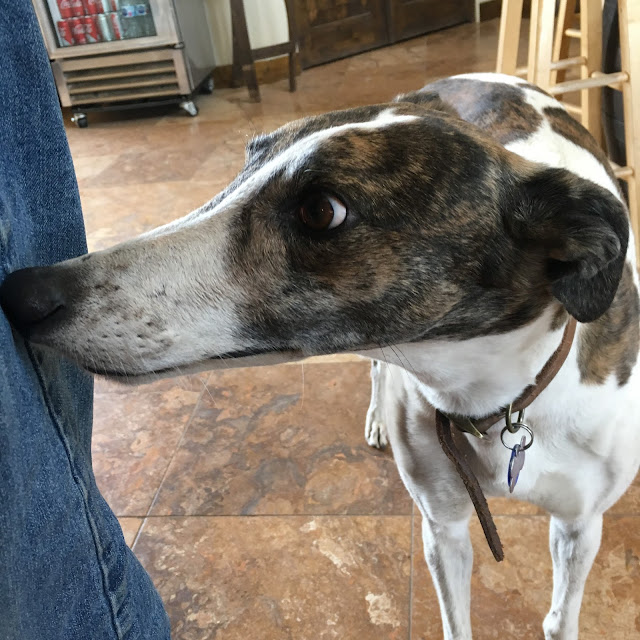 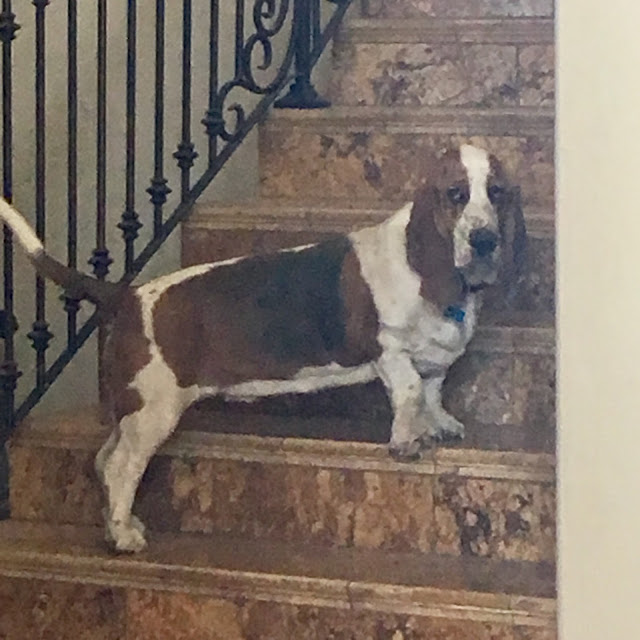 I know...tasting wine or playing with dogs...I think for me it was chugging the sample then playing with dogs!! The owner was delightful and informative of their grapes and wines as well as chatting with me about the "kids". Yes I can paint them...happiness is..

Then finally, a friend from the U.K. asked me if I could paint her grandson. I'm not a portrait painter, or so I thought, but I'm willing to give anything a try. This is an 8" x 8" watercolor and gouache on 300 lb watercolor paper. And yes, happy to say it's going across the pond.!! 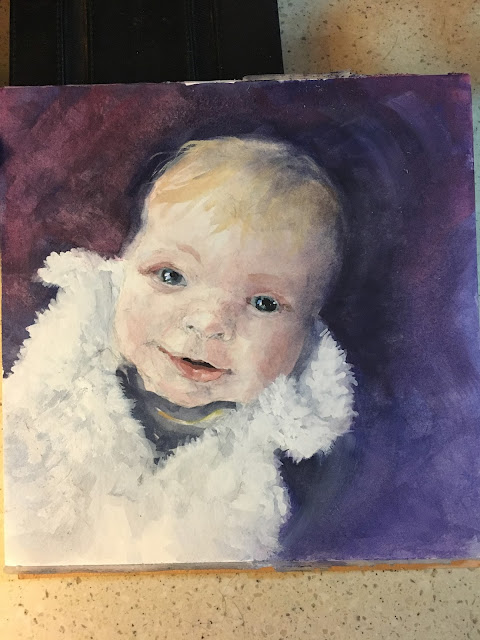 Well I'm off to paint now and get my day going. It's in the 80's today so we are getting a feel of the Arizona heat. We are noticing more and more people are starting to leave the park heading to other places that will be cooler. We leave the Wednesday after Easter but before then there will be other adventures!!

Posted by Sheila Wedegis at 2:56 PM