Last Wednesday we all piled into Bob's truck and off we went to Tombstone, Arizona.  It's about 22 miles from where we are staying at the RV park so a short drive past vast, vast land covered in scrub brush or Mesquite trees. (Hard taking a good photo as one whizzes by in the back of a truck). But the land is vast! I know, I keep mentioning that but I think my brain just doesn't comprehend that amount of space. 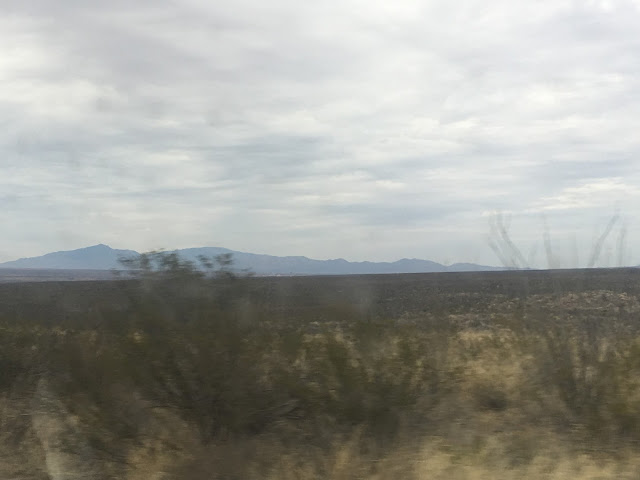 We arrived in Tombstone and for the time, I just know I had my boots on with spurs a janglin' and my 44 hanging by my hip. (spaghetti western music heard here now) 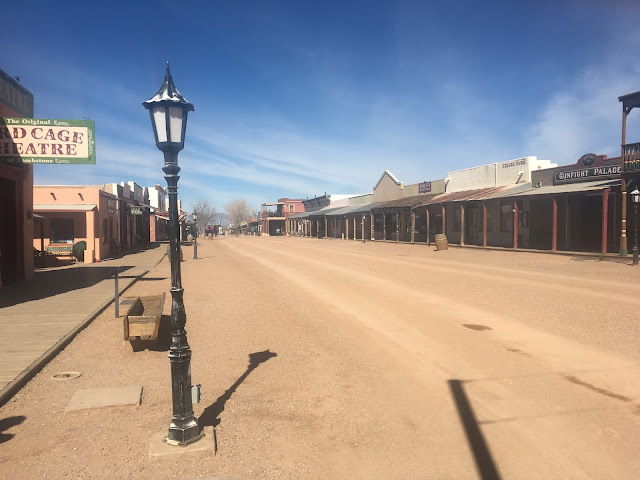 So before you do get to town you stop first at the Boothill Cemetary. (It's the least expensive stop on your journey, $3.00 per person to enter.) 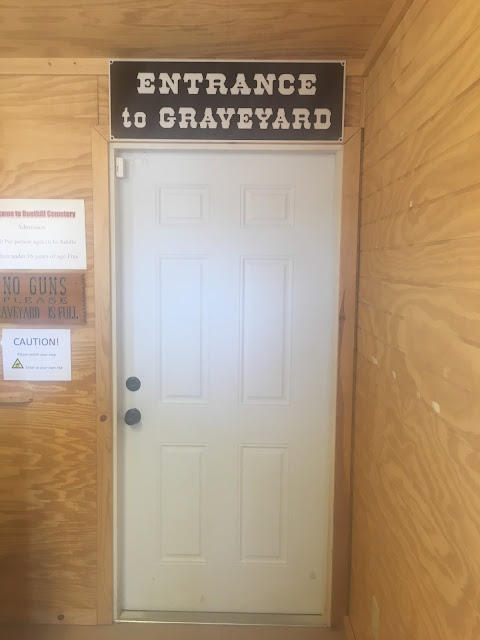 My Birthday is March 16 and I'll be 71, (52 in my mind though), so this door was kind of bizarre to me and I remember just saying, "Oh geez, really?". But the whole graveyard was "built" with a sense of humor because back in the 1800's with people being shot for looking the wrong way or killed by Indians they had to have a great sense of humor to survive. 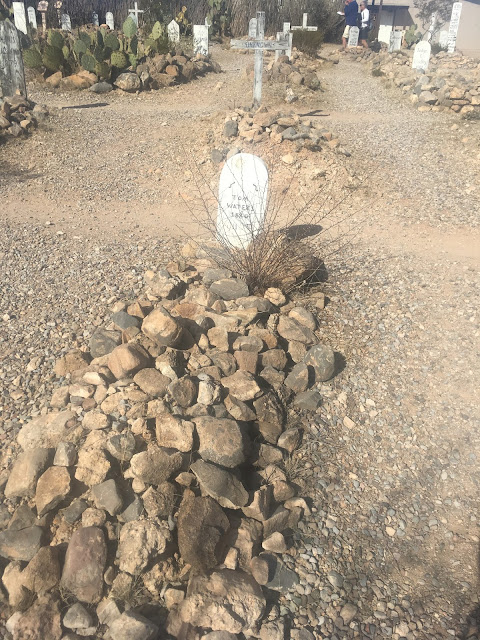 For example, Tom Waters here. He was shot and killed because a fellow didn't care for the shirt he was wearing. He bought a blue and black plaid shirt that day and was being teased non stop and of course, liquor was flowing and a fight ensued and poor Tom was dead. Fashion police to the max! 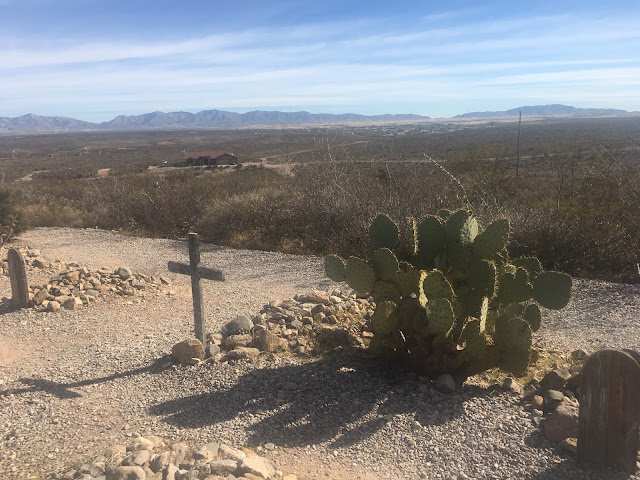 While others took pictures of the graves I wanted to see what the spirits see at night when they come out to wander. One thing that is mentioned as you wander through the cemetery and then you see it , is that it's segregated. One section for Jewish, another for Chinese.  Some markers have "unknown" listed, others a name and cause of death. Murder, hanging, one natural death, Killed by Indians, shot, and suicide.

One woman died from suicide. Hearing the history and violence of the town I felt bad for her. Was her husband a miner and away or drunk all the time? Was it the desolation and loneliness? Probably all of that. Then one man also committed suicide. Poor soul, and yes I did speak to them as I walked by. 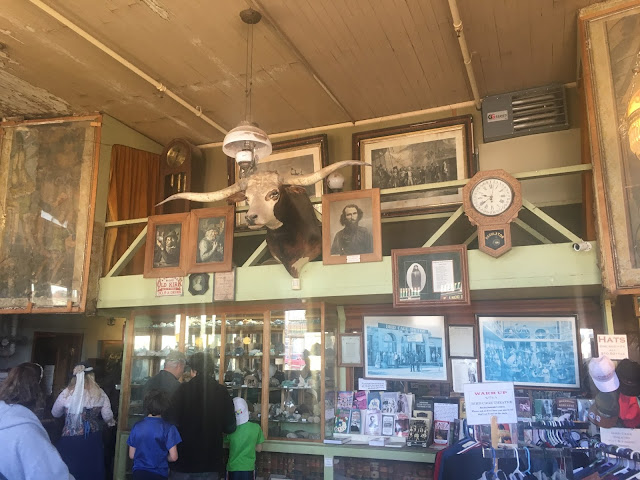 Back into town our first stop was the Gilded Cage Saloon. They have not changed a thing in this establishment since it closed in 1889. Or dusted, but that adds to the authenticity. Up stairs on the balcony to the left and right are "cribs" for the working ladies. They charged $25.00 an hour and back then just think of how much that was.  The stairs to the left that go up, out of view, are worn and the top three steps are almost worn to the breaking point. Ah those men!!! 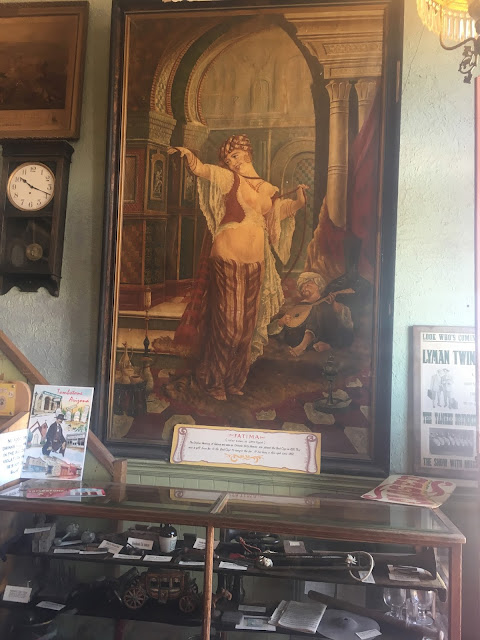 Hanging on the wall to my right and those infamous stairs going up along that wall is Fatima! "Little Egypt". Her given name was Fahreda Mazar Spyropoulos and she got her start at the Bird cage. An artist did this painting and sent it to the Bird Cage as a gift.

One of the many bullet holes in the frame. Not by a critic but a drunken gunman aiming at another guy. 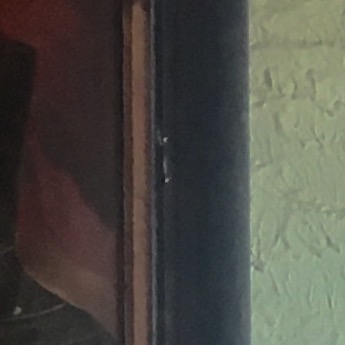 One gentleman thought Little Egypt needed a new belly button so climbed up and gave her one. 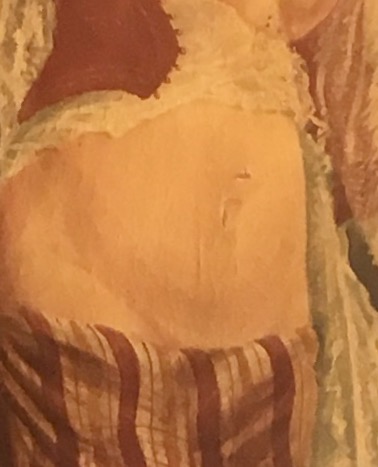 The more men drank and the drunker they became, it was said that one man thought Fatima was actually coming off the ledge and moving towards him so he shot. You can see the bullet holes in her skirt. Fun bar don't you think? Oh look, there's Virgil Earp. I smiled and said hello but he's a solemn man. He turned and walked to the entrance to a passage way and checked his...cellphone.  (Deer in headlights look here..how dare he take me back to reality) 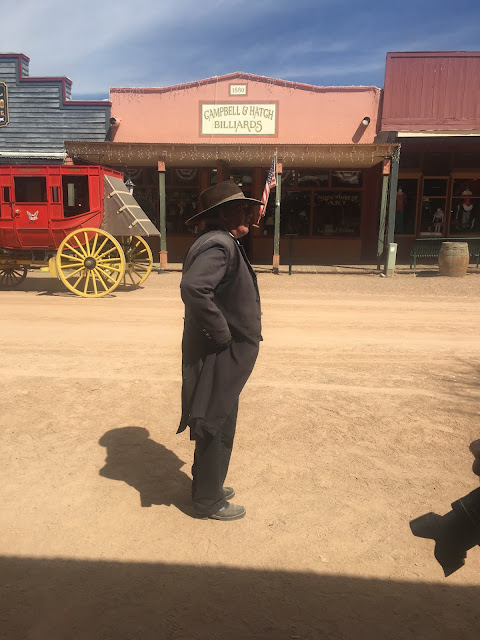 Oh oh, there must be trouble brewing...
That's Morgan, Doc Holiday, Virgil and Wyatt Earp heading down to the OK Corral. I think I'll leave town for a bit. 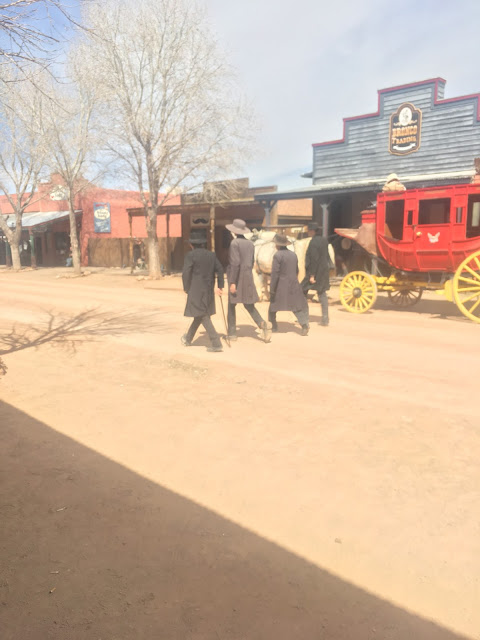 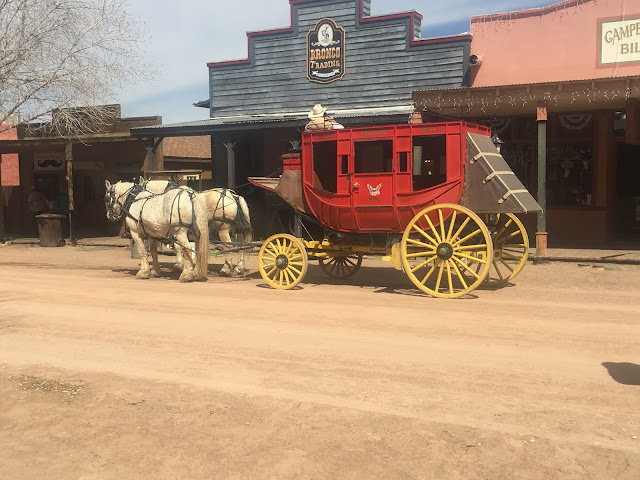 Tickets are $10.00 per person, they are authentic coaches and it takes you out of the main street and around the town showing points of interest. So and so was hung right there, so and so lived here and then died over there. If you ever saw the movie "Romancing the Stone', one of my fav's, there's a part where the mexican outlaw drives the characters around town trying to escape and shows them his favorite chicken and his cousins house. I was waiting to see Wyatt's favorite chicken on this ride. 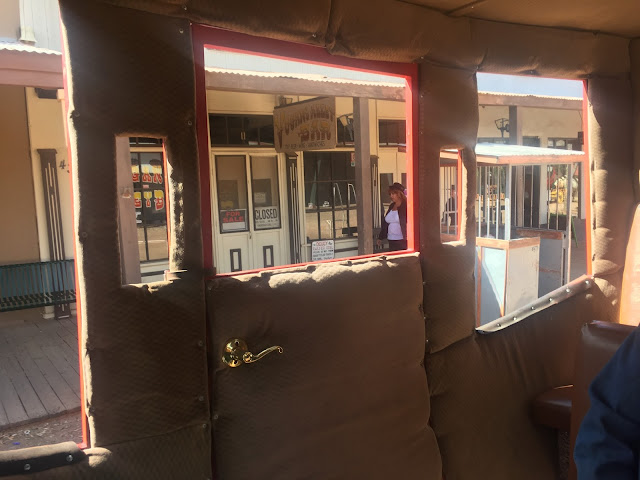 We arrived back in town a little weary from our journey. It was good to be back.
(I can't even imagine how bumpy it must have been driving long distances. We were going at a normal horse gait and bounced quite a bit. Exciting though)

Trouble at the OK Corral? We better get there!

A showdown over months of threats, romantic rivalries, stage robberies and arrests and after 30 seconds and 30 shots fired, Frank and Tom McLaury were dead as well as Billy Clayton. Ike Clayton was unarmed and ran away to be killed in another year. Doc, Virgil and Morgan were wounded by Wyatt was not.

It was time to eat so we had lunch in the once named Bucket Of Blood Saloon. It is now the Longhorn Saloon, good food, good atmosphere. Then after stopping at the amazing fudge shop we headed for home.

What we didn't get to was the place that housed the rose bush brought from Scotland by Henry Gee and his wife Mary. They planted it and it grew in the desert soil and is now the largest rose bush in the world being in the Guinness book of Records.  We may go back..(yes for the fudge, of course silly gooses).

Have a great day and thanks for following our adventure.

Posted by Sheila Wedegis at 1:42 PM