A Night In Van Horn

We left Demings, N.M. yesterday morning around 9:00 A.M. and started on our continuing journey Eastward. Left, left, right and left and we were on the road. 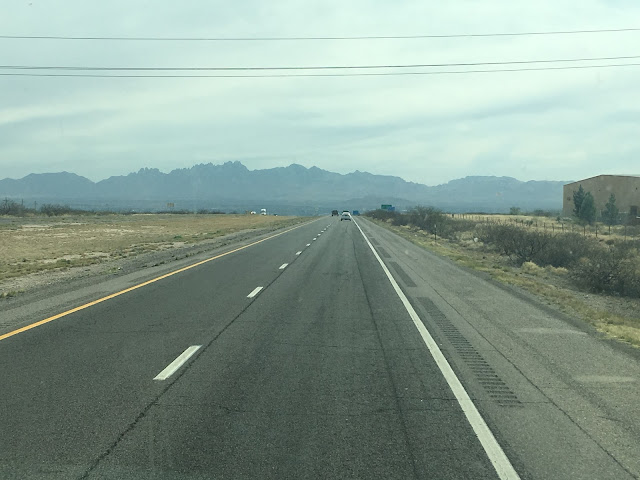 I knew I'd have to check the dolly straps before we entered onto I 10 so we pulled over and I tightened them yet once again. Then we found the entrance to the highway blocked so back to the west we drive to the next exit then proceeded on the bumpy interstate, on our way. We were heading to Van Horn, Texas, elevation about 4000 feet. Not sure if I told you but CiCiBlue doesn't like thin air and since I've had a tough time adjusting I'm thinking we may be related.  She was doing great then Roger said, oh-oh, our generator just shut off. 😐

We travel now about 60 MPH, saves fuel and it saves my sanity. Rigs pass us going 75, 80 and my thought is always if you have to stop short or that insane burst of wind hits you from the side are you prepared? Yesterday a spider dropped down in front of Roger's face as we were going and yes I'm still laughing, inside though. 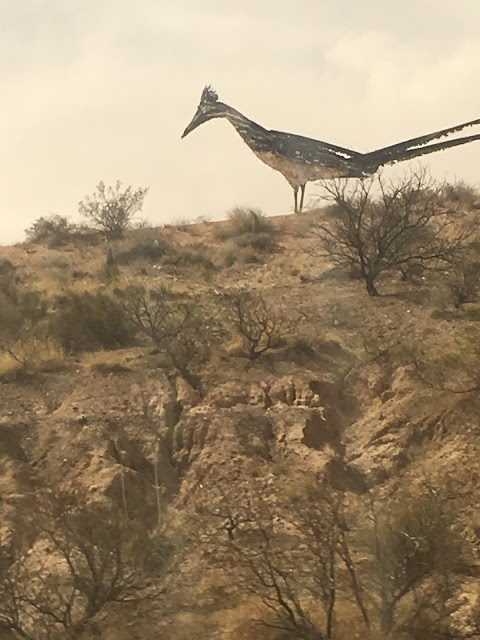 My job now is to stand up and hit the generator button to see if it will stay on. After about 5 times I googled and saw that it just may be low oil. Off to find a Pilot station. We are traveling with friends so were we go or where they go we are there too.  Checking the oil level we found it to be low so into the basement to find the oil and funnel but alas, when you need it it hides. Into Pilot and out comes a new gallon of oil and a funnel, a short stemmed funnel for an oil "hole" that's way in a small compartment in the front of CiCi Blue. First, the jug doesn't fit and second the funnel is so far back..it's a disaster waiting to happen.I'm not a mechanic, yet, but I had an idea. Roger came back out with one of our plastic drinking cups. Voila'!!! Three cups and oily hands later I had the baby filled. Start the generator. The thought that entered my head as we were going through El Paso was I'll never get a DVT in my legs because I was up, down multiple times turning it back on but each time became a bit longer that it ran.

Quick thought about El Paso...bumper to bumper traffic, hot and CiCi wasn't happy but we got through and I'm pretty sure I could see Mexico from my passenger seat.

Did the generator ever continue to work? Yes it did! We had our refrigerator and A/C working just fine.


A Stop Along The Way 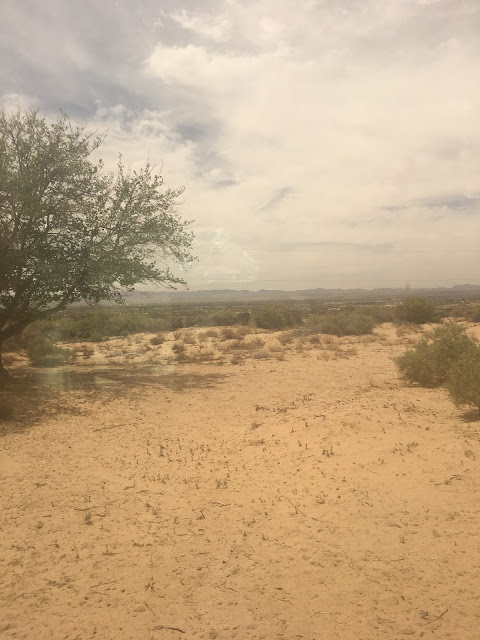 Border Checkpoint on I 10 East towards Van Horn, Texas 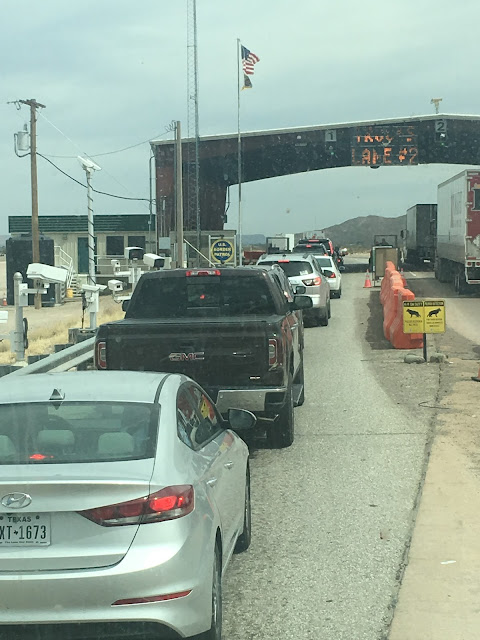 We had been through checkpoints before but this one was serious. Not that the others weren't but since we are closer to Mexico they seem to be on high alert. That yellow sign with the dog on it tells people to restrain your dog since there is a working dog on site. As you know, Lola loves looking out the front window as we slow down and at the last checkpoint she barked at the dog. This one I need to blindfold her. I had her turn her back to the window and prayed we wouldn't be detained as long as the previous RV had. "How many passengers do you have on board?" "Two", Roger answered. "Are you both US Citizens?"  "yes".  He then waved us through. During this the working dog was sniffing around the basement of our coach.  What you will see along I 10 is large areas on the road that a car went up in flames. Huge burn marks. Wow, it was hot and someone forgot to put oil in their car? After seeing about 10-15 of these burn areas we knew what was really happening and a new reality set in. 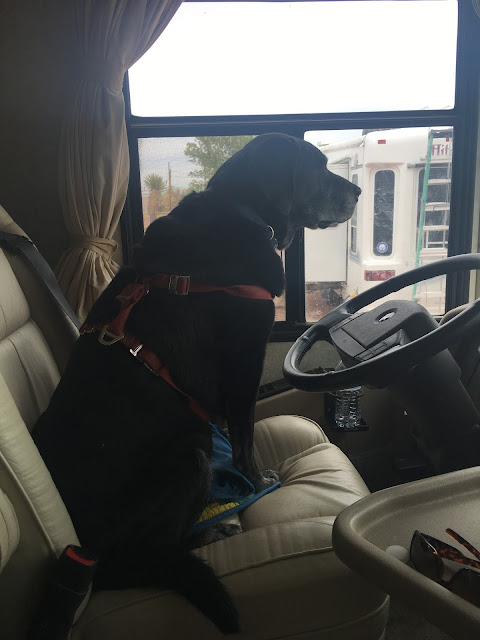 The time keeps changing as we travel so Sammy got us to Van Horn at 4:00 P.M. Central time though our body clocks thought it was 3:00 P.M. Mountain time. It was at any time, happy hour. We take the kids out then hook up electric, water and sewer, lower the rig , put out the slides and take all the "stuff' out of the shower and off the bed. Then grab a glass of wine and go sit with our friends.

Ok, this is what the blog was really about. The train! It runs parallel to I 10 and the campground and I can see it out our bedroom window as it passes at night.  When I was young my Dad always brought my sister and me to see the "puffers", steam engines, come out of the round house in Allston, Ma. (We lived in Brighton) We stood on a bridge as they passed under, breathing and puffing as they went. Dad would have us step back so we wouldn't get the soot in our eyes or clothes but it was so exciting. Then when the diesel engines came we would go to the train station on Cape Cod and wait for him to come down from Boston. Trains have always been close to where I've lived and needless to say I love them.

You can see many trains traveling across the country as you travel. And yes, I have many photos. 😂 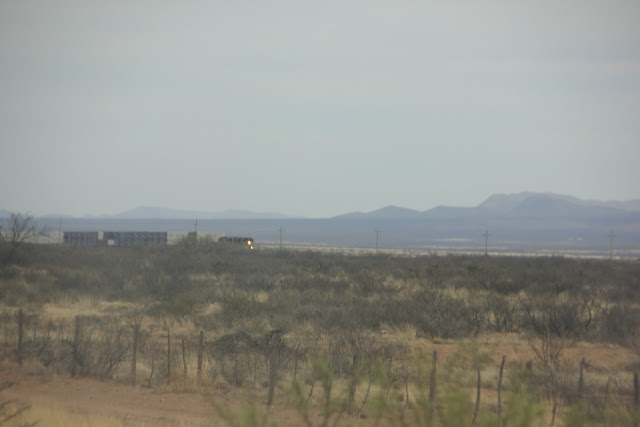 Last night I opened the window and listened for every train that came. I could hear them getting closer and knew that they would blow the horn as they came past the town and cross ways and every time I jumped with surprise then laid there with a stupid grin on my face until about 11:00 P.M. and they stopped for the night. My Dad loved the West but never got here except for books so every train is for him.My night in Van Horn!