I set my alarm last night for 8:30 A.M. . I took my shower before bed, watched some shows then took a Benedryl.  The heat rash still wants to attack me at night. (I swear it's the mattress) The alarm went off as alarms do and I made the coffee since Roger took the kids to the park for their morning constitutional.

Off I went since I knew my reservation would come up early to pay and get back on the road.  "How was your night?" ,I asked.  "Fine".  Not exuberant but it was something. He left and I scooted home to have breakfast. 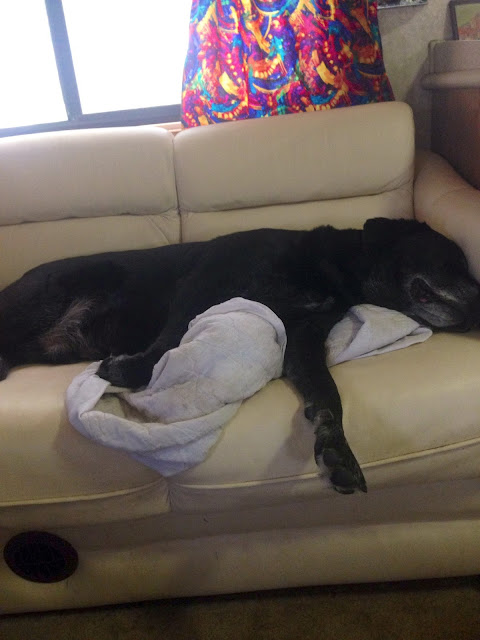 This is my Sammy. The poor guy scratches and  chews his paws. I emailed my vet and he said maybe fleas but I did his comb and white paper trick on Sam's fur and no trace of them. Next I got a spray.Dermal-Smoothe.  Could it be that Sammy's skin is really dry?  I started putting olive oil in his food and today added flax seed oil.  I feel so bad for him so next week I'll take him down to see Dr. Mike. My Sophie had similar symptoms but lost hair but Sammy is sleek and smooth. Sophie had Thyroid issues and was on meds for the rest of her life.  Final thought is Sammy may need a really good bath. He's always been in a pool and this summer is so much hotter than last.  I'll let you know.

Ok, back to the office! A call! A man from Miami wants to come here for 4 nights while his wife is on a cruise.  Sure, come on up and I'll find you a 30 amp site.  "OK" he said and he's arriving tomorrow evening.
My next person was amazing. He stopped outside and knocked on the door. "Hi, how may I help you? Come on in."  He wanted to find out if we had room for him to be here fulltime. He then started to tell me this horrid story of how he was attacked while he was a night supervisor of a storage place. I'm not sure if anyone heard about this event, but it was all over the news.  Young men attacked him, beat him with their gun, stole from his trailer and robbed other units after they put him in the trunk of his car. I already knew the story but my eyes were floating. Such a kind, gentle man. He just wanted a quiet place to stay with other people so he would feel safe.  I reached the owners and the answer was YES! He is so excited and grateful.  This was the high point of my day as you could tell.

One more younger man came in and he is also going to be here full time with his new 5th wheel. I had his look at 2 sites and he chose one. He'll be here on Friday.

Whew!!! Did I get to paint? No. Sliding into a slight panic mode which will light that fire under my you know what and I'll have flying brushes!!!