Day #7 And A Great Experience In A Week

Where to begin. I am enjoying the position of "Camp Ranger", but then again, it is summer season. Not that busy. The thing that keeps coming to me as I do my job, is how I do it.  I want to do the very best garnishing from all my other "jobs". The other side to this "excellence" thing in me is that it's actually an avoidance from doing what I'm meant to do. Paint. Ah, that white canvas.

Today is the park was "Pretty The Park" up day. Roger and I made it up so we would get things accomplished that we were asked to do. It's hot, triple digits in the heat index, but if we put it off it won't get done. This morning I went to the office to check on phone calls and Roger went to drill a sign back on the pole. Nothing big but it points to the direction of the numbered sites. #1 thing done on our list. Then I rode my bike to the dog park and trimmed bushes.

It was hot but a small breeze helped. Then this afternoon, Roger and I went to trim the back area bushes where a banana spider and her baby have a web. I believe they will jump on you if they feel threatened, so we kept reassuring them we wouldn't hurt them. Haha 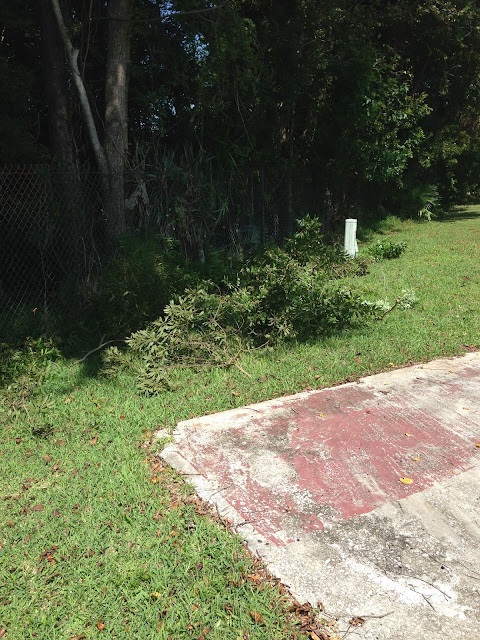 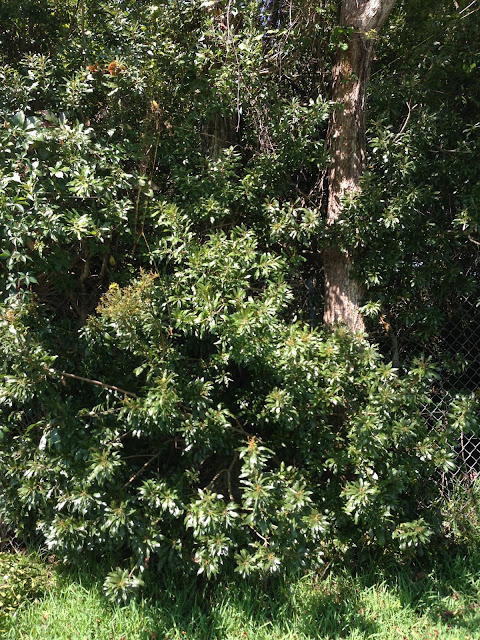 Not sure it if you can see her but she's a bit orange and yellow and dangling upper left.  We cut her web on three sides and she started spinning right away. I'm sure when we o down later with the kids she'll have set up house once more!

Ok, now we will go backwards to Saturday. I came back from the office around noon and started to take the dogs out for a quickie. All of a sudden the lights and a/c shut off.  Panic. Roger grabbed the leads and I went to the office to check. Lights were fine. It was us.  We grabbed the
Country Coach bible and started going through trying to find why everything was out. Outlets worked and our microwave was fine, so what was the answer. I called two repair places but no one answered or returned our calls and it was Sunday the next day so it was going to be a long weekend.

Roger tested the coach breaker panel and one did not respond so off he went to get a new breaker. Trying to get it back in was insane but thankfully, Rick, our mobile RV repair guy is coming back up to fix our stairs and blow out our a/c units.  The breaker was fine but still no a/c.  Off again to the store to get tower air conditioners. Then the night started. Lots of water, both us and the dogs, but oh my word, so much was lost. It was cooler outside but there are mosquitos so that wasn't an option for sleeping. The dogs and I slept in the living room. For some reason they are always with me. Roger had the bedroom. So very hot. Sunday I know we had lost weight. Our friend Lou sent me a message saying why don't I ask our friend Jeanette if her husband Mike would be able to help.  They have a 38' Monaco so maybe they might be able to help. We spent Sunday on the rec ball to keep cool but nothing seems to help at this point. (no husbands or dogs were crabbed at during this time).

They were traveling but were going to pass us in about 10 minutes so they stopped by. About 10 minutes later, off they went and we had a/c and lights! In the showrooms sales people hit a button on the side as you walk into an RV so you can see and have a/c. Oh yes....my cute butt or Lola's hit the button as we were going out of the coach. Insane!!! Thankfully no repair people called us or came up. $$$ for switching a button back on. Haha. We'll, now we know! 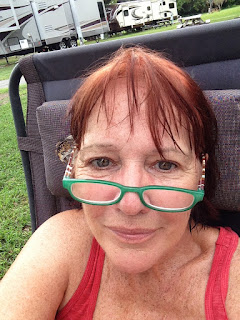 Yes I was a little frazzled!

Before I get to my ATV people I will tell you a fun thing that happened during the week. My artist friend Lou came up to spend the day with me. She and I both watch this British comedy, "Miranda", starring Miranda Hart. She is an embodiment of both of us so we laugh hysterically. One of the episodes Miranda had a great tea pot, so, we copied it! 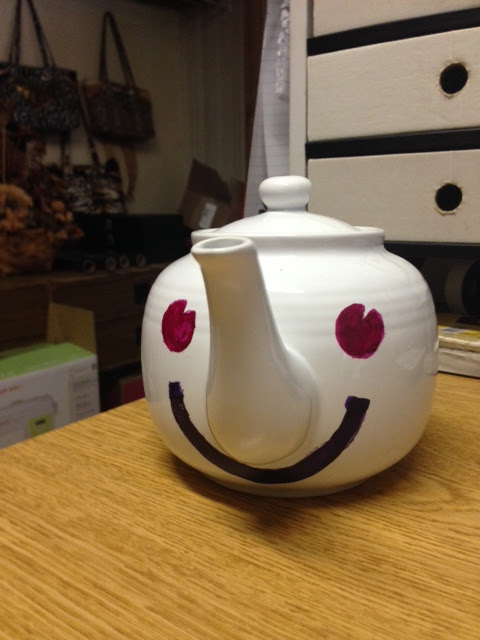 Now onto the weekend. Saturday we had three ATV people coming in. They arrived at 3: 30 P.M. just as they said they would. The guys were terrific,paying right away and one even offered to let Roger and I sleep in his rig overnight as they would be out riding all night. So sweet. We are right up the road from 5a . A large expanse of land that is used for dirt bike riding and mudding. This past weekend was some sort of rally and 100's were showing up to play.

After they were settled I rode down on my bike to check the mail and a new trailer was coming in. I stopped them and asked if they were part of the group. No, he said, and can we take the front spot. Sure. I told him Wendy was on vacation and I was in charge, continuing to ask how long he was staying and when he'd be leaving the next day. Mid day he answered.  Sunday I rode past him a few times and mentioned I'd be in the office for him. At 9 P.M. that evening he was still out riding. They must be staying over! May I also mention my phone number was on the office door plus my site number.

The next morning they were gone! They do come here often so I will remember. I felt crummy that I missed a payment on my watch then went to think, "wow..he so dissed me." Did he think since Wendy was not here he didn't need to pay? That he would pay next time in? That I wasn't worthy of him coming to the office to pay for his stay that he extended to a two day stay? I will remember him. he comes with his girlfriend and a Boxer that he leaves in the air conditioned trailer for hours on end.

Shaking it off. I finished a painting that I am proud of for a friend/client. Also, a couple came in today to stay two days so that was good.  Wendy will be back next week so the RV park journey continues!! 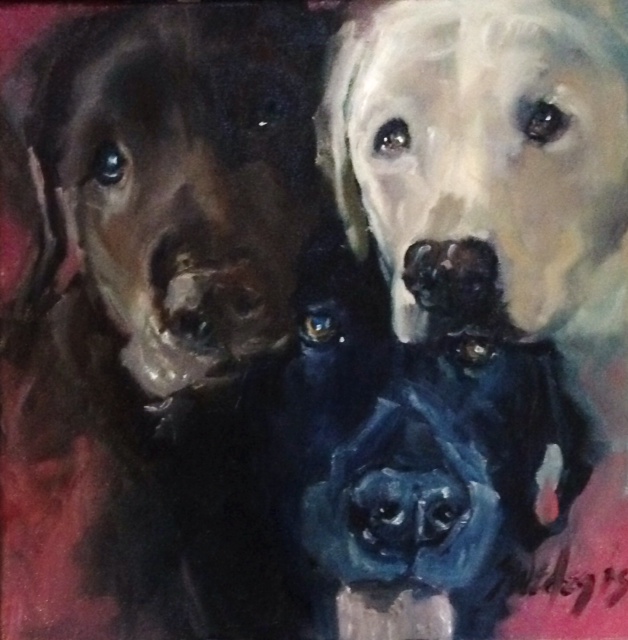 But doing this is what makes me the happiest!!!!

Have a great night and chat soon.

Posted by Sheila Wedegis at 6:00 PM