The Other Side Of The Vacation

So, we left Big Hart Campground last Monday. We were a little tight in our space so we re did our hand signals, as not to kill each other, and I started to proceed to back Roger and Ci Ci Blue out of our site.  He did fantastic. I climbed back in and off we went. Our plan was to stop in town at Love's truck stop to fill our tank and get our front tires up to snuff. Perfect plan because as we went in our check engine light came on. We proceeded around to the rear of the parking area and as we pulled in the stop engine light came on then, we shut down totally. 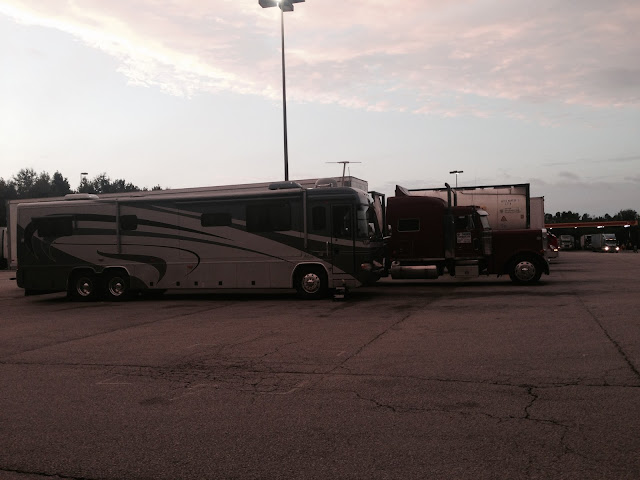 The positive thing was we were safe. The "Duh" moment was we forgot to renew our Coach Net , 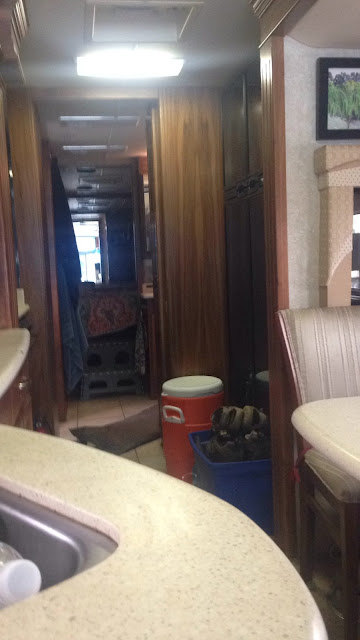 Roger is an ex submariner so CiCi Blue in her Sub mode is very comfy for him. I, on the other hand, had to learn how to survive in closed in quarters with 3 large dogs and a hubby. The bed was a challenge. Lola sleeps on the end of the bed on the floor so she was confused and I on the inside felt claustrophobic.  Lola and I slept in the living room on the couch, accompanied by Ozzie on my feet and Sam on the chair next to me. Geez Louise.

The next day Couch Net sent us a mechanic. 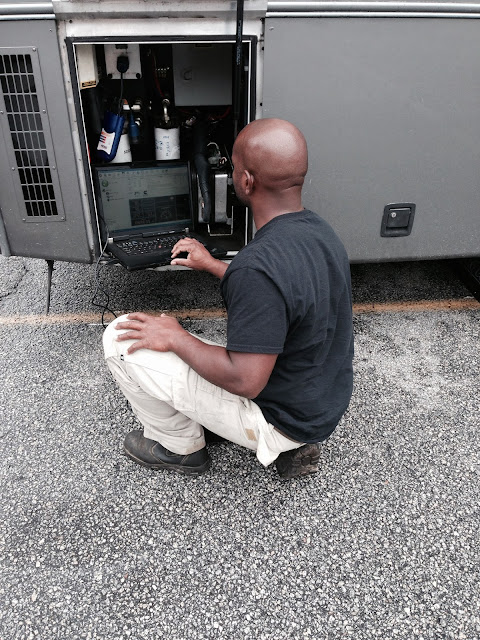 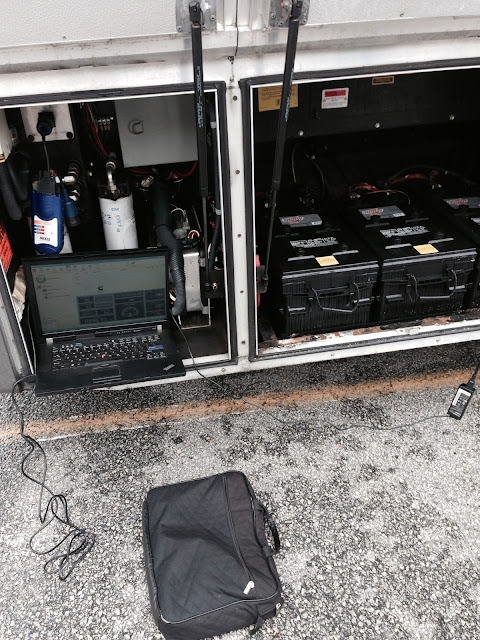 JonJ. He had all the testing equipment so to work he went.  His computer program showed that our oil pressure without the sensor, was good, but with the sensor in it wasn't.  The check engine light would be on without it but with it in, the coach shut down.  What should we do?? Stay one more night and drive up to Cummins, our engine "god" to have them recheck and see what they could do. I called and made an appointment for 8 A.M. the next morning. We got there at 7:45! Please make note of that! 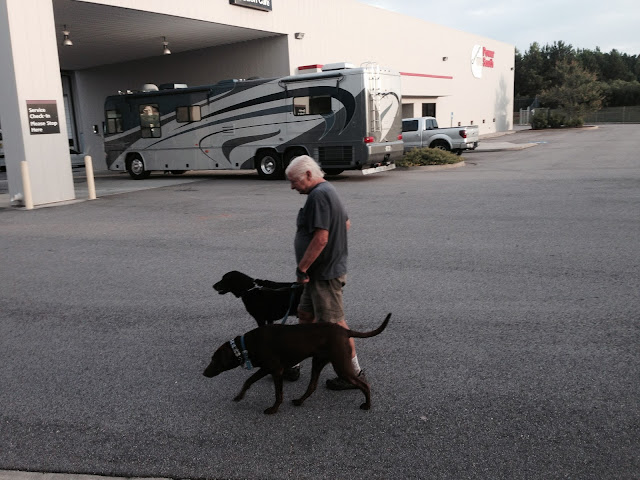 8 A.M. and walking the kids. We are hoping they find something so we can be on the road soon. 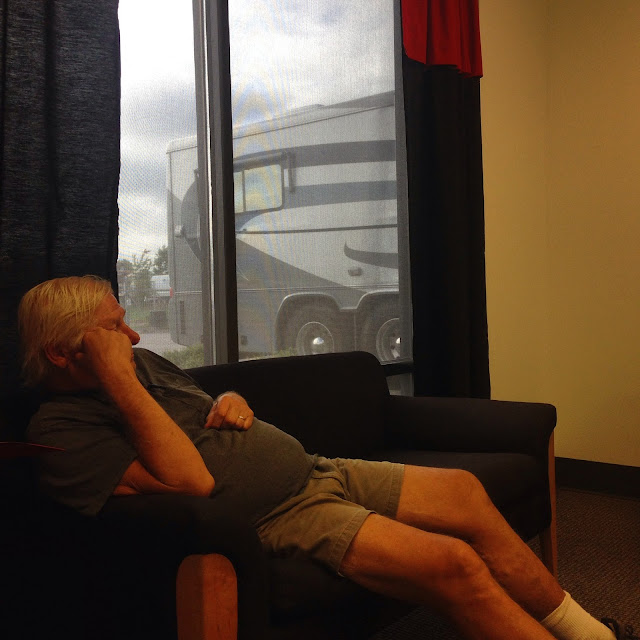 11:00 A.M. and Ci Ci Blue hasn't budged from that spot! We got up at 6:00 A.M. so we could get ready and drive the 1/2 hour to where they were located giving some time for going slow and worrying.

Finally they took her in and put her on the computer for analysis. (It takes about 2 minutes at most). At 4:00P.M. the guy saw us out walking the dog and gave us news. Sell it!!! Sell CiCi BLue was what he said. We heard the Charlie Brown grown up speech for the next few minutes which we were able to sort out after we gathered ourselves. I said to the guy we've only had it for a year to which he repeated that we should get rid of it. Oil pressure is an issue and with the rust on the bottom and not being able to get parts it's ridiculous to keep it. Sell it and get another.  He added he'll change the oil and oil filter and send us back to Florida and "Hopefully you will make it!".

For about an hour Roger and I couldn't speak. Finally I said exactly what he had been thinking. We gave up our sticks and bricks house, my studio space, my artwork sold, our furnishings, things we have had for years to get our dream and live it together. Roger added, well we could still live in it. True, but that's not our dream....! At this point I wasn't sure if I'd crawl up in a ball or just cry. Then Roger said.."We won't let anyone steal our dream".

We then went into manifesting mode and positive thinking along with a few prayers to cover all bases. 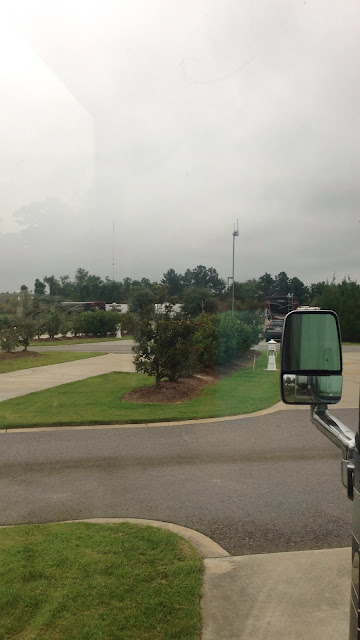 They unplugged the sensor so the coach wouldn't shut down and told us that as long as the gauge was reading 20 psi, ( it wasn't working correctly so it was actually 40), we would be ok to reach Florida. Off we went and CiCi Blue was running smooth. We made it to our next stop for the night. 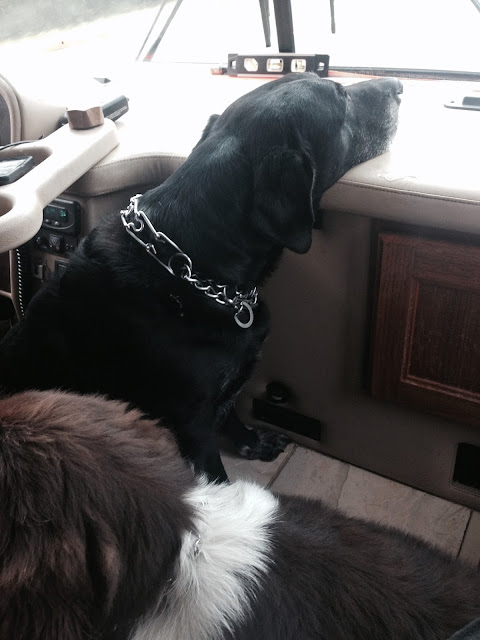 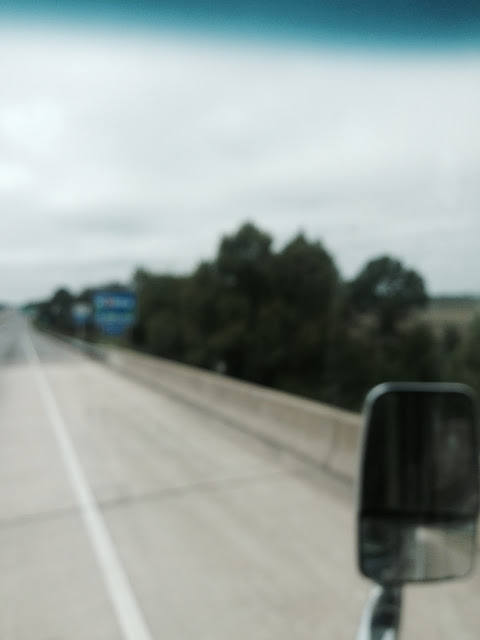 Fuzzy because we went over a bump but it says "Welcome to Florida". 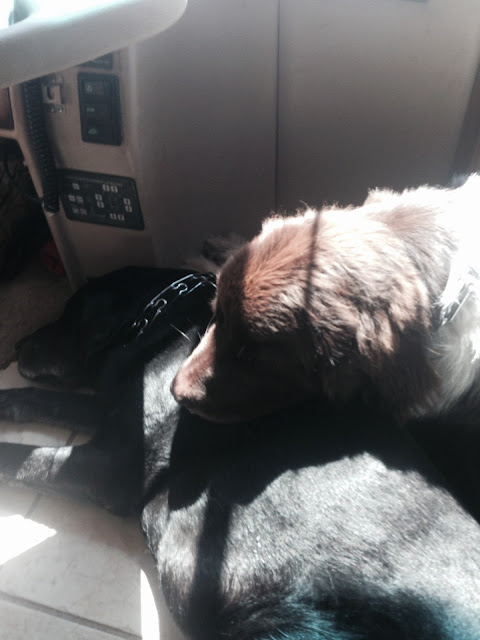 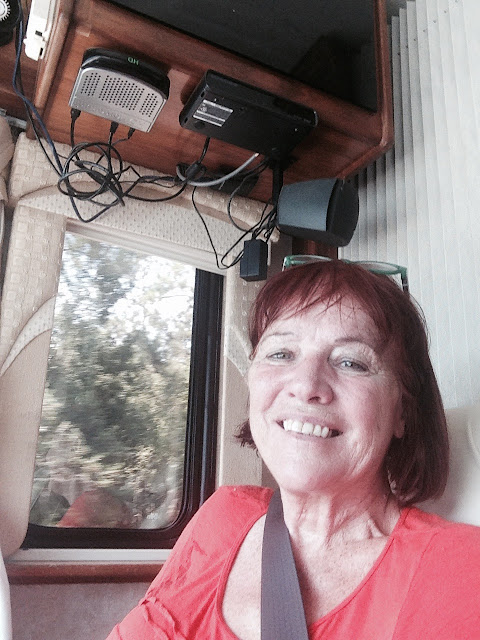 Feeling confident that we will get back ok!

So, I'm firing up my Etsy site and getting ready to do everything we can to get CiCi fixed and healthy. Our friends, Jeanette and Mike called us today. Mike is good at mechanics and after I told him what was going on he told me that it could probably be a ground to the chassis or bad electrics causing the problem. Funny, that's what Roger thought too.  We all came to the conclusion that the man at Cummins in Augusta just wanted us to leave.  Last year we were at the Cummins in South Carolina for our Coolant pump and they thought something was off and asked us to stay. What a difference.

We are doing tons of laundry today and watching our team play football. Go Pats!!! Lola turned 3 today so we sang and had Hoodsies now the kids are sleeping. Good day. My FB friends have been so supportive as well as my Florida friends. Much appreciation and gratitude.

Keep you updated..for now we just need to take a breath and sort things out.

Have a great day..
Warmly,
Sheila

Posted by Sheila Wedegis at 2:55 PM