Our First Week Back

The week was setting our outside area back up and getting laundry done.  (Still working on that one).  We jumped right back in to working around the park and that felt good. I needed art supplies to be delivered so getting things accomplished before they arrived was a good thing. Trees trimmed and bushes cut, and of course, more needs to be done.

Yesterday we all went to the Mims, Mullet Festival. Honestly, the only mullet I ever heard of was the crazy hair cut in the 80's.  So, it's a fish! They even crowned a "Miss Mullet, 2015" . Roses, a banner and crown. The young girl was thrilled.  We didn't stay til 2P.M. so we never got to see the Mullet Toss. 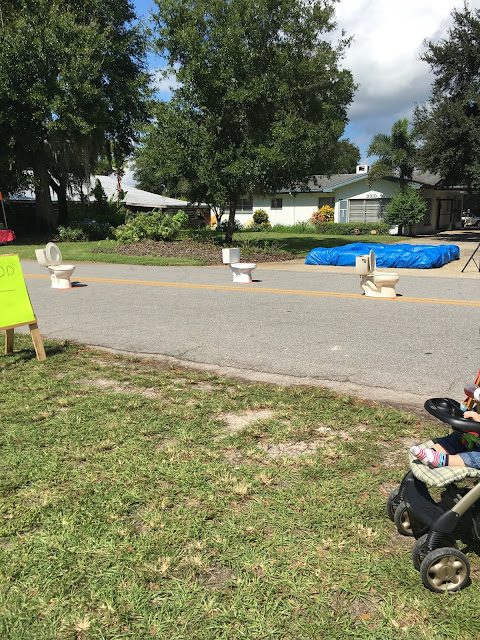 Yes, they are porcelain containers. I guess that each contestant gets 3 mullet then tosses them into the...thrones. The winner gets a basket of goodies and a trophy. Runners up also get a trophy and maybe get to keep the fish.  During the display of many things Mims, the volunteer fire truck had to leave due to a call. Off it went only to return and to go the opposite direction.  Everyone waved.

I did get to meet a lovely young woman in a wheel chair who just got her service dog. We spoke and I asked if I could pet him. Usually they are on their job so the answer would be no, but this day the woman said it would be fine.  To show me him working she dropped the lead and told the dog to get it. He turned and picked it up with his mouth and gave it to her. Three years old, he went through a rigorous training. 6 months with a puppy care person then off to prison for another 6 months. After that he went to serious training to learn over 100 commands. Then he went back to prison to work there with the convicts. Finally he does training with his new human!  The next dog I met, yes they are the ones I like to meet when I'm out and about, was a bomb sniffing black Lab. (And his handsome bomb owner). I went to see the Lab, honest!!! His name was Peanut and was 12 years old. He has discovered 2 active bombs in this area over his service. In training he got everyone. Amazing. Mine, however, can detect red licorice hidden in my shirt while I'm hiding under the covers in bed!!!  Pretty good if I do say! 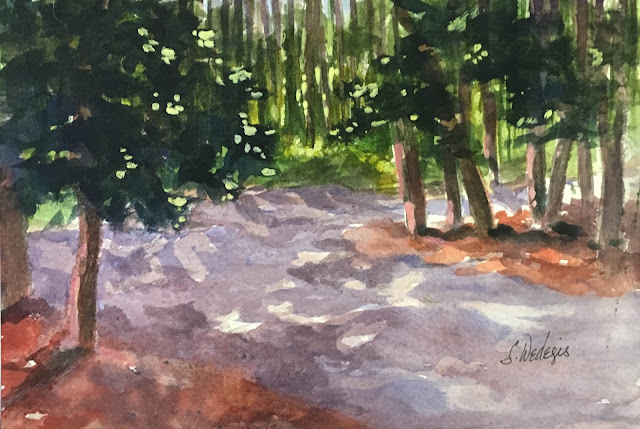 I worked in watercolors today. While we were at Big Hart Campground I did a pencil sketch of what I saw out our window every day. Today I painted the scene and I'm pleased! 7" x 10" and soon to be on my Etsy shop.

Dinner is just about ready so I'll close for today. Have a great evening and we will chat..hopefully, tomorrow!!

Posted by Sheila Wedegis at 4:55 PM