Where Are We And What Day Is It?

These are common questions between all of us as we travel. It sounds like we all have lost it but traveling every day or every other day one does loose track of days and places. So, yesterday we went to the Clinton, Oklahoma RT. 66 Museum. I have to say it was pretty cool, so much so that now I need to reread Grapes Of Wrath. That area of the country just dried up and people had to leave carrying only what they could pack in their cars or trucks. The Dust Bowl era. 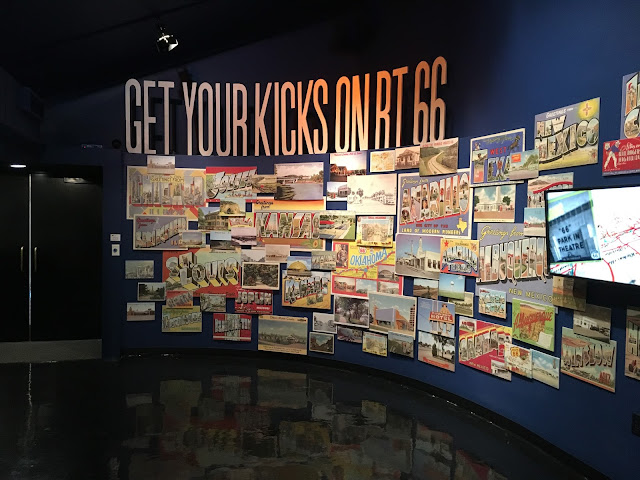 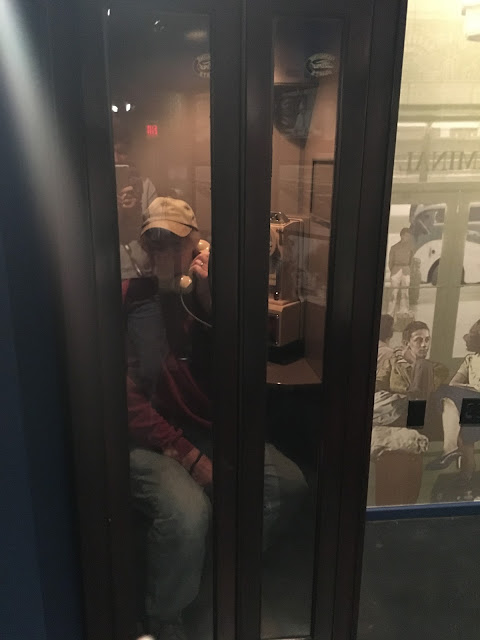 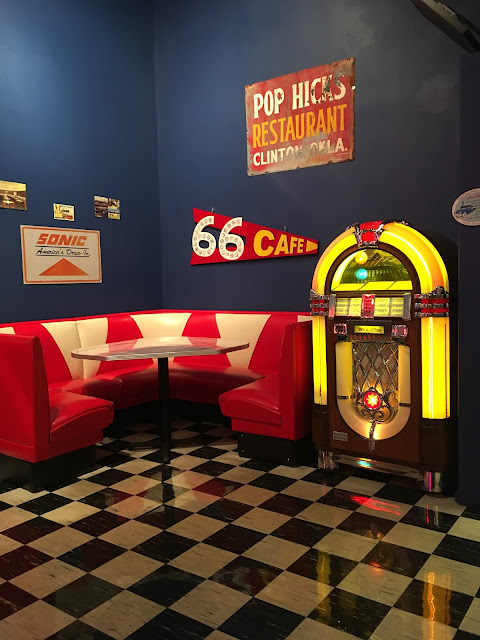 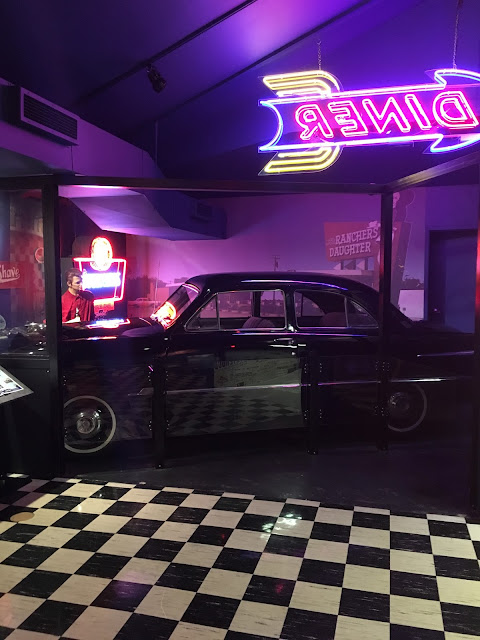 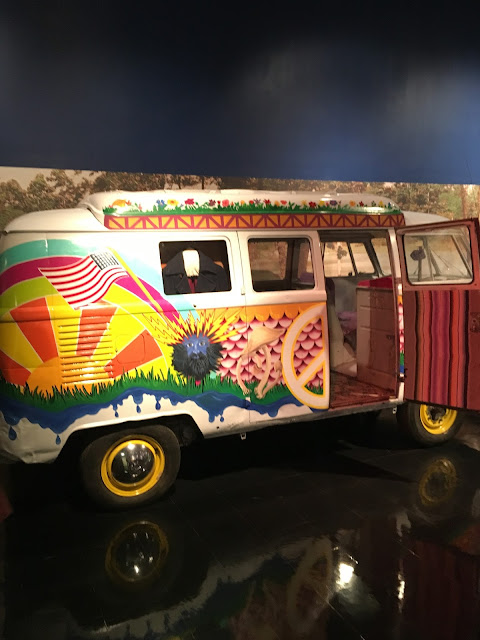 It was a time capsule of sorts with music and photos throughout the museum..and..I got a tee shirt!

This morning we left Clinton, OK and headed down I 40 West. Suddenly I heard a loud bang and fluttering. I then looked out of the door window and saw our over the door awning straight out and flapping. "Pull over!!" was the scream but we were right in the middle of a construction area with cones and Roger couldn't. The next exit was a ways down and off we went. We have a remote to bring it back in but something had broke. We could hear the motor turning but the fabric wasn't going anywhere. Thankfully Bob came with his trusty extension ladder, pretty cool devise, and was up and poking at it. He was able to get it closed but it wouldn't hold. I gave the executive decision..."cut the fabric off." Sometimes I surprise myself how my priorities are about safety rather than trying to figure out how to repair it, taking maybe hours. We were on a mission! Bob cut it off then unscrewed the cover. We were set to continue!! On a weird note, as I was putting up the awnings this morning I actually felt that something was going to happen to the awning. Thankfully it was the smallest awning and we do have insurance. 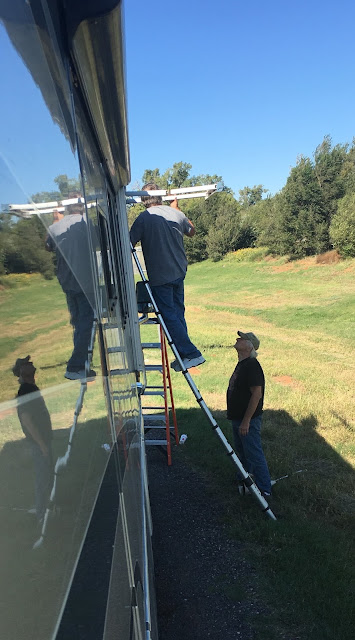 So we were rolling along when we heard the sound of flapping. Very loud flapping. I looked out the window and our awning that goes out over the door had sprung loose. We couldn't pull over right away since we were in construction so we drove to the first exit and took it.  Bob and Betty were behind us and Bob came to the rescue. What did we want to do? Cut the fabric off and take off the cover. The motor was running but the roll wasn't connecting so it was doomed to stay out. The winds across Oklahoma this morning were upwards of 16 to 20 MPH. I may not have totally brought in the awning at some point. We usually don't use it. Driving at 55 to 58 MPH plus the cross winds just caught it at the right point and dragged it out. We think about safety, getting to our destination and it's replaceable. Onward!! 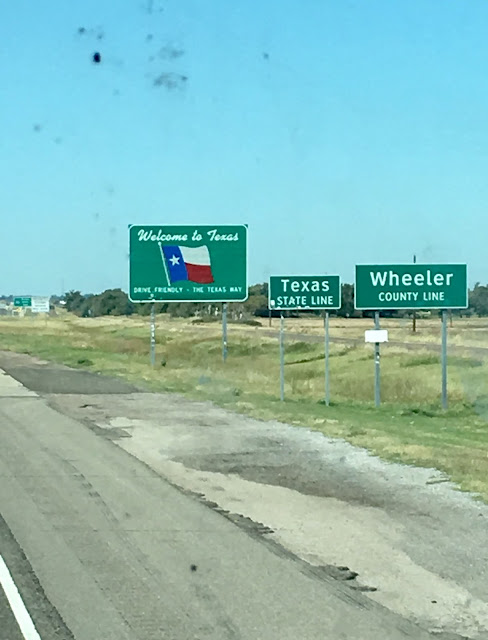 We entered Texas. The flattest state and the most expanse of land ever. 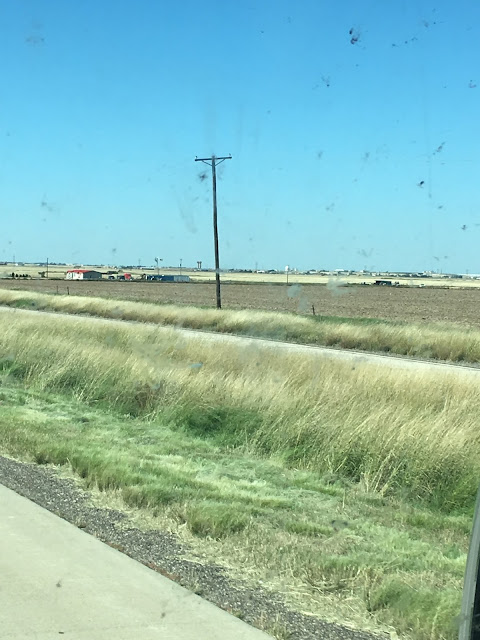 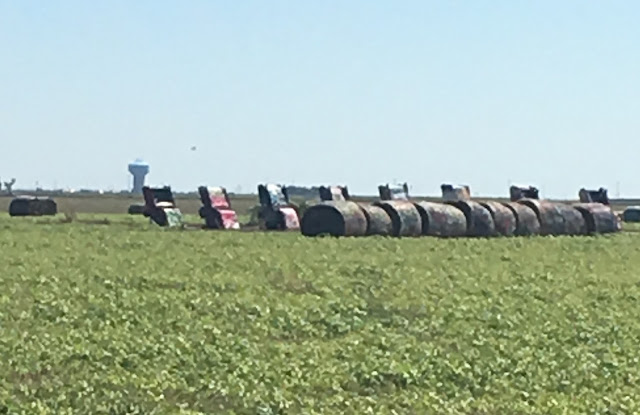 We couldn't leave without seeing the Cadillac Ranch. Roger and the "boys" walked out while Lola and I stayed in the coach and had a peanut butter and jelly sandwich! We have our priorities!! We had parked CiCiBlue far from the Cattle gate entrance so Lola and I decided to move the rig closer! Yes, I did. I had to laugh because I had no idea where the brake peddle was in relationship to the gas. I know it's close but after a car brake it's even closer. I need to practice foot work!! 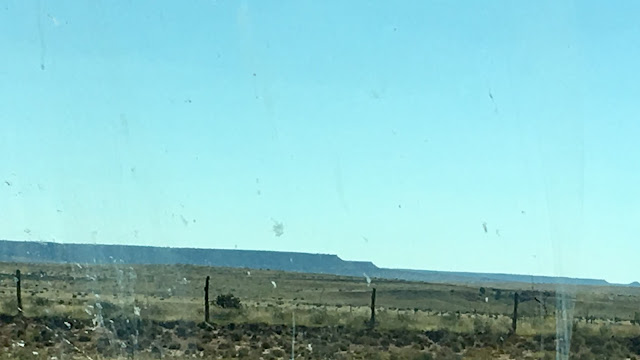 Then all of a sudden the landscape changes. It's quite dramatic. From a few seconds ago seeing flat land, now we are going down into a land of scrub brush and mesas. I'm in heaven!!

Yes, we are in New Mexico! 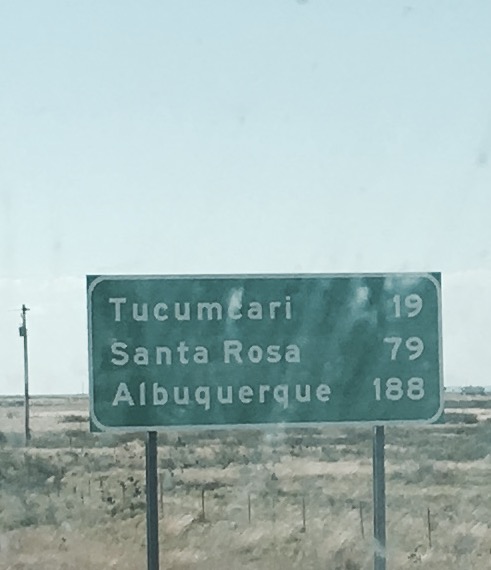 Now I start to sing Jimmie Rodger's song "Tucumcari" from the 50's. I had the 45 record and played it over and over. My poor parents!! 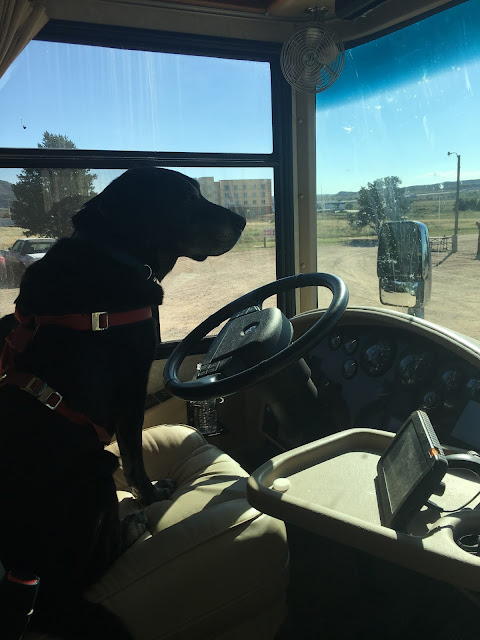 And once more Sammy got us to our night RV park. Mountain Road RV Park. Full hook up and right off I 40. There's even a Pilot station close in case one needs to fuel up. 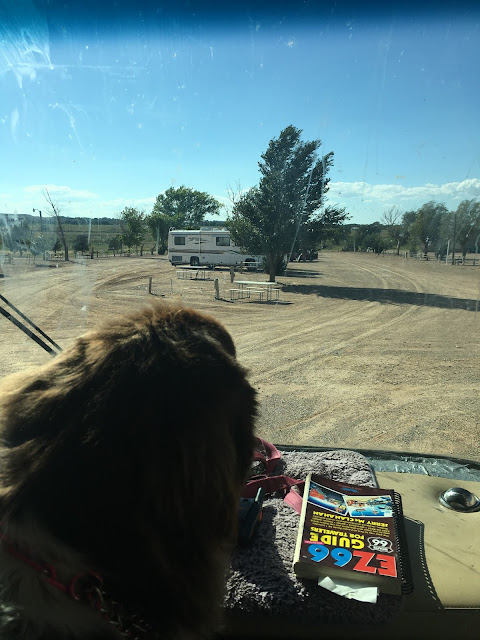 Lola being the Queen here looks rather perplexed. "Whaaat?? We are in a parking lot?" 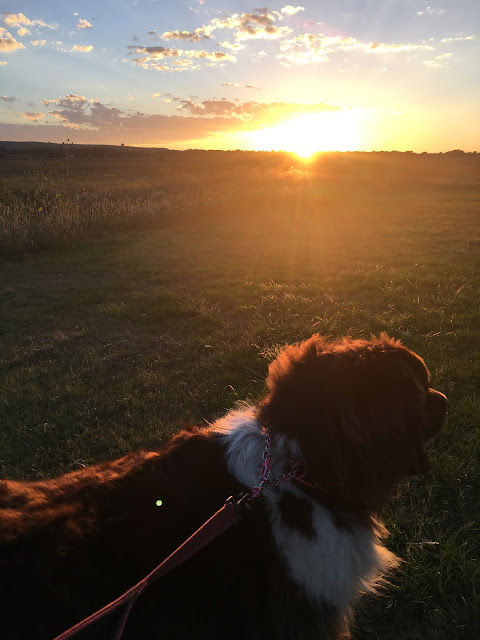 I have been waiting for the sun to go down to see the light on our first night in New Mexico. I love seeing Lola with it bouncing off her fur. We did a quick walk. She doesn't like the feel of the scrub grass, and she looks like she's walking on eggs. She's very fussy about her feet!! Haha. 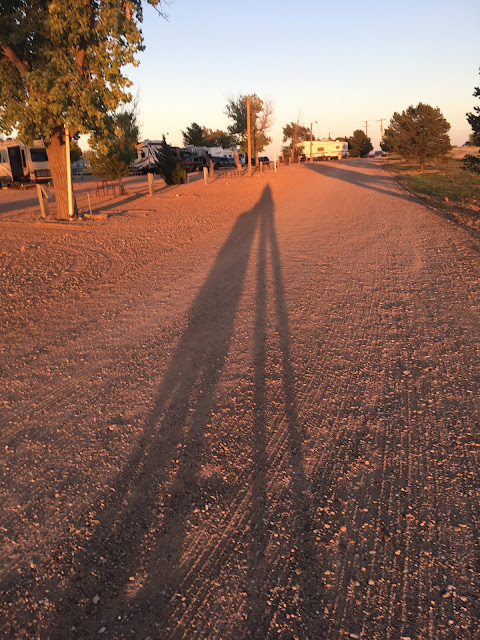 I laughed right out loud!! When I was younger I was told I had legs that "went on forever". Lola and me with our long legs!!!

Tomorrow we head for Edgewood, NM. Most of the parks were full and we wanted to stay for two nights. A friend on Facebook mentioned it was because of the Hot Air Balloon festival in Albuquerque which goes on until October 15! We are all excited because on Saturday we are going to drive and see if we can see the balloons. Bonus!!

Have a great night. Roger's cooking up cheeseburgers and pouring a glass of wine. I had a shower, the kids ate and now it's time to just chill for the night. Thanks for joining me on our adventure!!

Posted by Sheila Wedegis at 8:53 PM