Where The Winds Come Sweeping Down The Plain

And they did. We came across western Oklahoma today and the wind gusts were about 11 to 14 MPH. CiCiBlue is a heavy girl so it wasn't too bad. See, Big and Beautiful is great! But, last night first. A cold front was coming across and about midnight we started to get rain. Since we have a surprise leak in our slide I was nervous. I had siliconed like crazy back up in NH so I was hoping it would hold. Then about 3:00 A.M. the lightning and stronger winds came. We were parked under a pecan tree and who knew? I'm learning so much! I guess I never asked where pecans come from but last night I found out because they fell like bombs onto the roof of our RV. Imagine being inside a trash can and have someone throwing rocks at you. Loud, and you never know where they will hit or how many at one time. Ozzie, our chocolate boy, started shaking. He sleeps between Roger and me and we woke. Sammy is the one who has panic attacks from loud noises now but he was out like a light. No mater how much we petted or hugged, Ozzie was a mess. I finally took a blanket and wrapped it around him tightly, almost like a swaddle. He finally fell asleep. (mumma knows)

This morning I checked our car and no damage. Getting ready to leave everything has to go into it's place. Roger then starts the rig and we start to bring in the slides. Since it had rained quite hard we tried to go slow so that the water on the top would run off, however, it ran off once we had the slide all the way in. So the mopping and slopping started and we didn't get to depart until 10:00 A.M. rather than our planned 9:30. 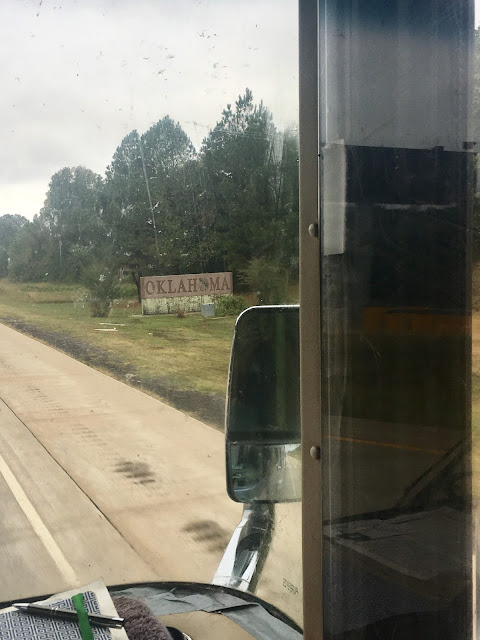 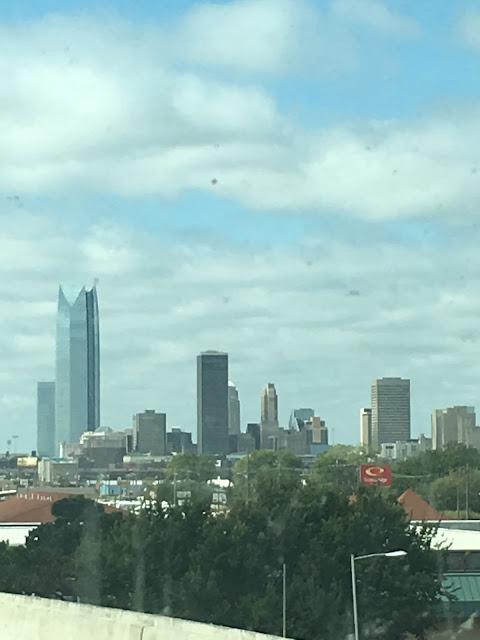 Since it was morning we decided to stay on RT. 40 and drive through Oklahoma City. It's hard not to think of the tragedy that occurred there, never to be forgotten.  We continued on and finally got out of the maze and back onto a smoother path. Sort of. Some of the roads are horrendous. 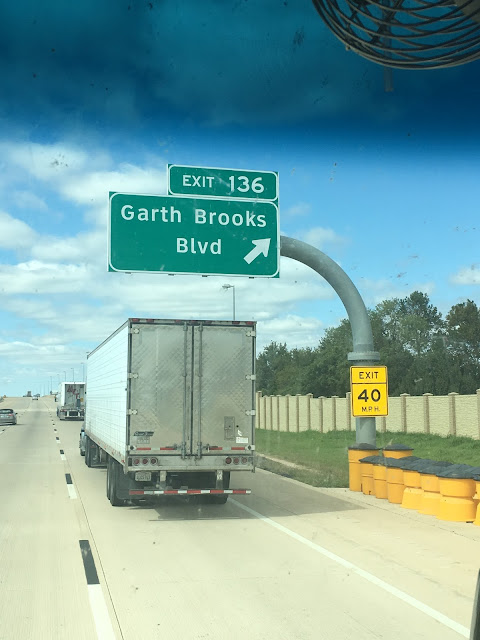 My daughter Erin and I both love Garth Brooks. His music was so part of our lives and when I saw this sign it was a "have to" moment. Kind of cool! 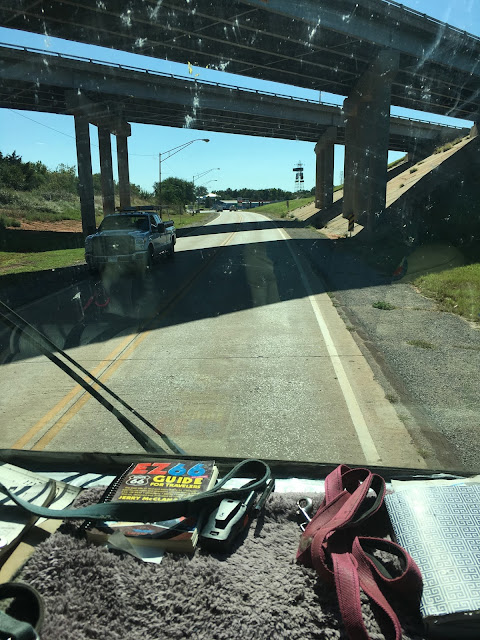 A comical note, if you travel through Oklahoma, wear a diaper! The rest stops were either closed and being repaired or non existent.  We finally found a Love'd truck stop and pulled in. The other option that I thought would have been fun was to stop at one of the many casino's along the way. Roger said though it would be more expensive for us to stop there than at all the rv parks in the country! WHAAAT??

This photo is the original Rt. 66. We came off of I 40 and here we were driving on it to our next stop for two nights. Hargus RV Park in Clinton, Ok. There's also a train the runs along the road up by the office. (I love trains). The park is divided into sections with the drive through area being on a second level. They are long and level on gravel with trees, yes, pecan, and grass. Each site has full hook ups but the sewer is further back so you would need an extension for your hose. A trip to Walmart is in the works for tomorrow! We may also go to the Rt. 66 Museum and I so need to paint. 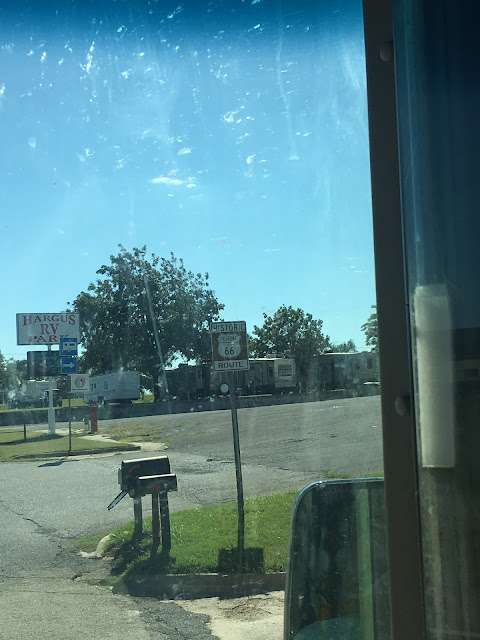 On our way into the park. 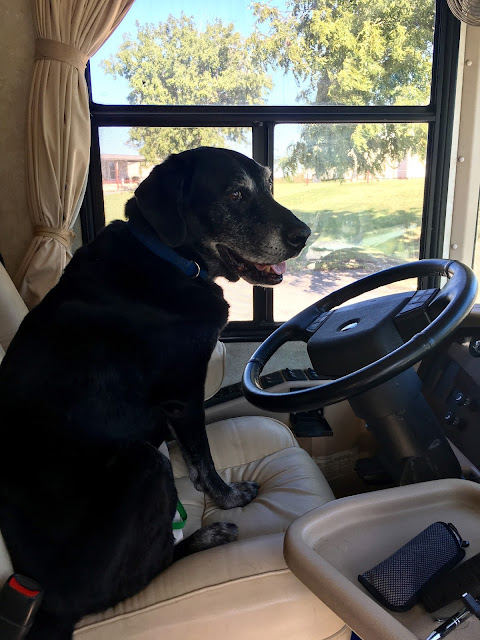 And thankfully, once again, Sammy has got us to our new rv park. He's so good isn't he? He has his "outfit" (harness) removed which means we are staying and he can relax.

Thursday we plan on driving a long day to Tucumcari, New Mexico. Oh ya, I'll be singing. Does anyone remember the song by Jimmie Rodgers? 10 more miles to Tucumcari....

It's getting chilly and the temp is going down to the 40's tonight so I'm happy the flannel sheets are on. It will be a great night for sleeping and we can actually "sleep in".

So have a great night and I'll see you tomorrow and let you know what one does in Clinton, Ok. I'm excited!!

Posted by Sheila Wedegis at 7:01 PM