A Cold Night Is Upon Us. 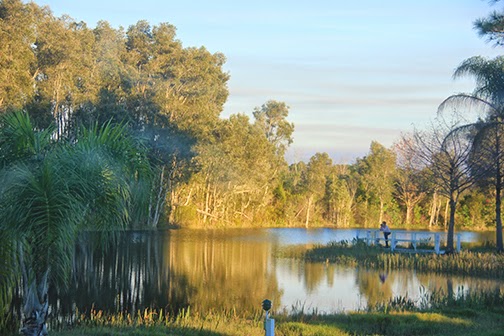 I have been watching some of the campers walking around with binoculars. One is out on the dock now waiting. At dusk the Great Egrets come flying in, legs perfectly straight out behind them, then landing in one of the chosen trees. Then the "Snake Bird", the Anhinga, comes in. Snake Bird? When he's in the water looking for food his neck comes up and actually looks like a snake. (We do have water moccasins in the lake and they do something similar when they are mating.) Then he dives down and surfaces again about 15 feet from where we last saw him.

Tonight the great cold front is coming down but not freezing in our county. Lola will be thrilled with the weather in the morning. (I better find my cuddly clothes to take her out.)

So, fun news. My bugaboo is people not picking up their dogs "doo" in the dog park or around the campground. Maybe they weren't watching and missed it but .In the dog park area Lola and I do a walk around the entire area scooping up "others" and there are times I have three of my kids bags and 4 of someone elses. I have also been helping bring flyers out to the campers and have planned a painting class for the 13th.  Also when I go around the park I pick trash up. (Today a banana peel by the trash can..almost made it in.)  The owners offered me a stipend if I wanted the job of the dog doo, the banana peels and the activity Crier!! Roger was excited too since it will take the edge off the expense of some of the things we need to have done before we leave. Thankfully I brought the long handled picker upper thingy I had at the house. Not sure why but the Universe must have known I'd need it. When I'm out riding around the park there is a sandwich carrier that blew done from Stuckeys that's been floating at the edge of the Lake. It's been driving me crazy and now I have a reason and long picker upper to grab it. (Snakes and Gator in that lake. hahaha)