Monday And I took The Weekend Off

I did! Yesterday though I did play with my watercolors a bit. As I have stated before, I love the field just above the campground. It's where Lola and I take our strolls and I usually end up taking many photos with my phone. Yesterday I painted this and today it went to a new home! Very exciting. 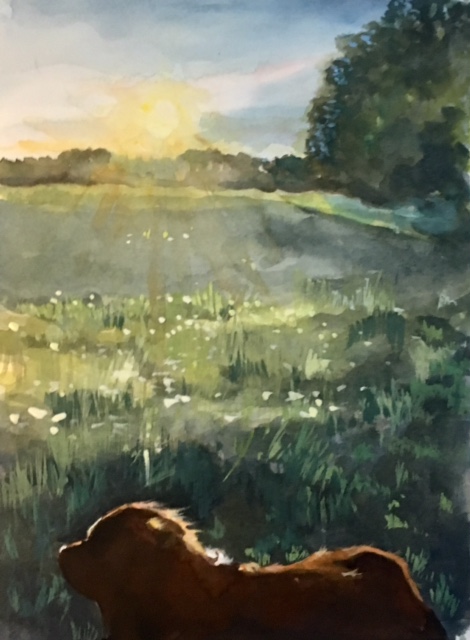 Amazon delivered a new set of Qor (core) watercolors today, a set of 24, and I'm ready to go. Tonight the sky was amazing so, yes, more photos.  Maybe a series of "field" paintings will be coming. Here are a few of the photos. 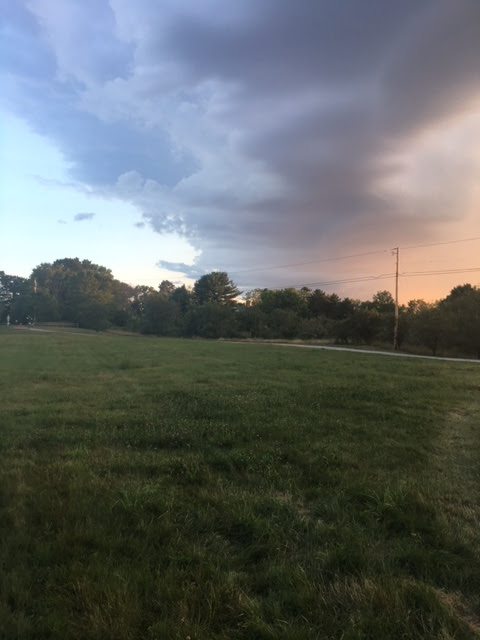 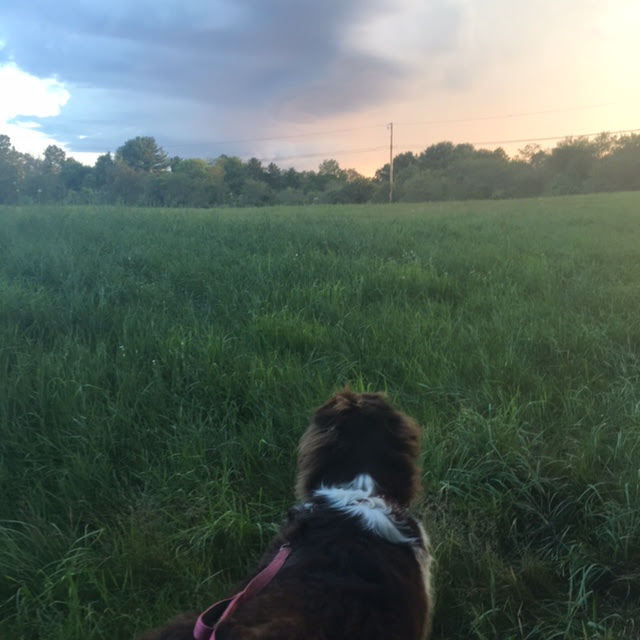 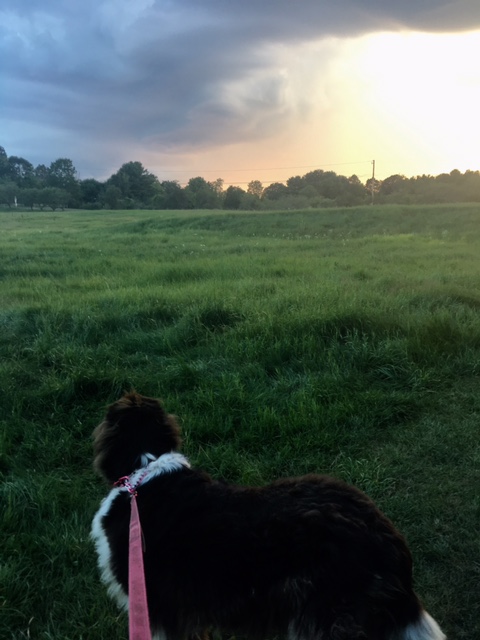 Just look at that sky!!

I was talking with the owner, Pat, today and she said she enjoys watching us cross over the field. Lola's tail illuminates in the light swaying back and forth. 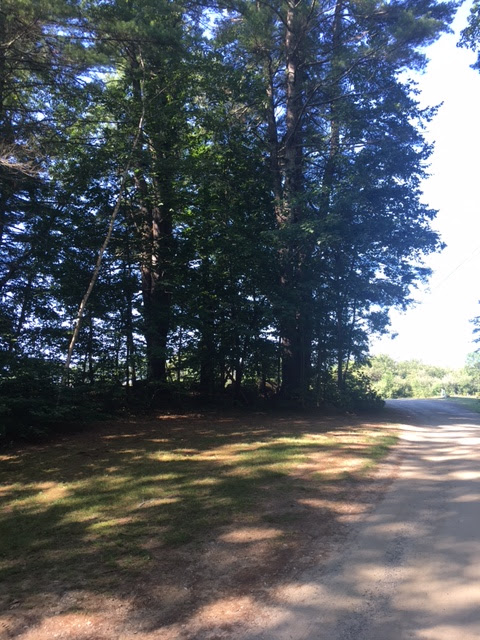 The road leading out of the campground and to the field.  I loved the way the light filtered through the trees and rested on the roadway. 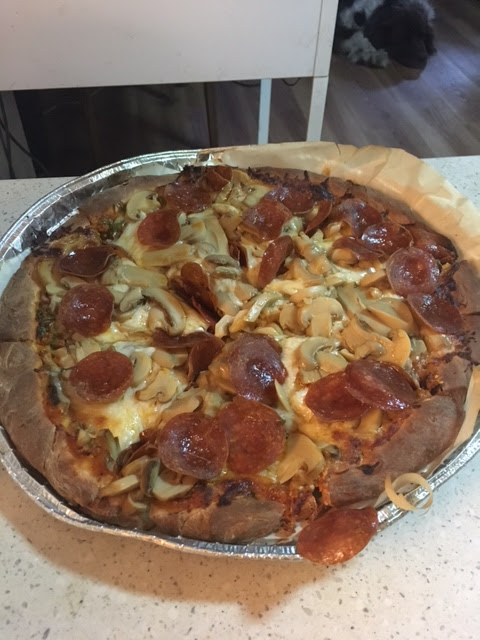 Oh, I almost forgot, here's the pizza Roger made us the other night.!!

And now it's Tuesday!

Roger made our first fire in the fire pit and I tried to finish the blog but, alas, it became dark! 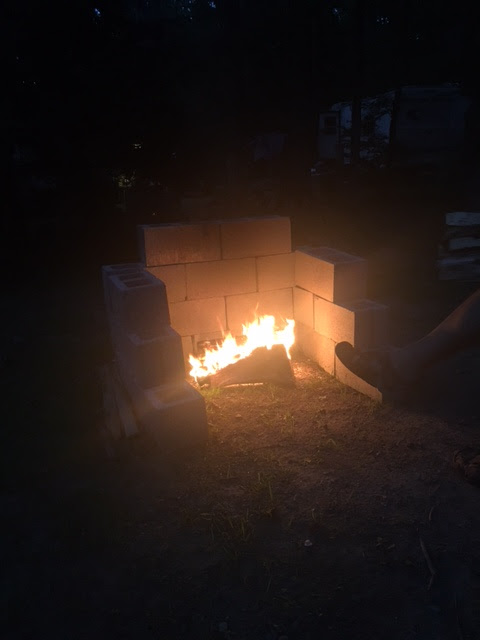 Just a small one for starters. Sammy laid down and was content while Ozzie decided to tunnel under the picnic table so he could have a dirt hole to lay in instead of on top of rocks. This morning my job was to clean up the area and refill the hole.  Lola, she wanted to go inside, then once in, to come back out again then to go back in. (Shades of my kids when they were younger).  Yes, I do find myself saying the same things to the dogs as I said to them.."Either in or out, I'm not opening that door one more time." She stayed out. She drooled non stop, rubbing her head against me because, dear lord, it was her bedtime and we were out in the dark in front of FIRE! Tonight we will do it again and hopefully by the time we roll out to our next adventure she will be a seasoned campfire girl! 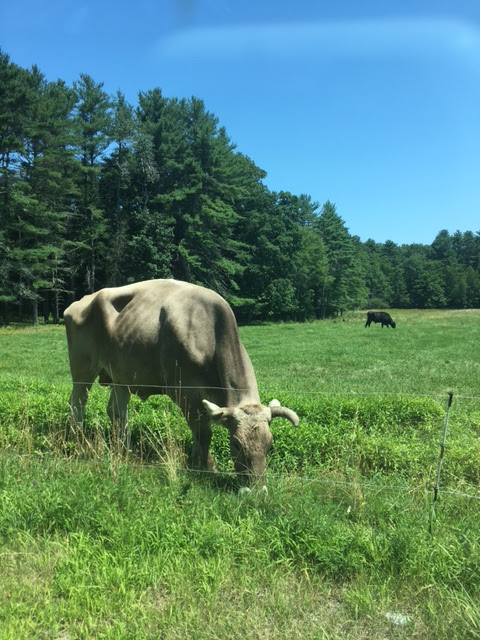 Just down the road from us here is a small farm where this guy lives. I stayed in the car with the window up, oh I have lived in Florida for too long, and took his photo.  I'm so loving it here. 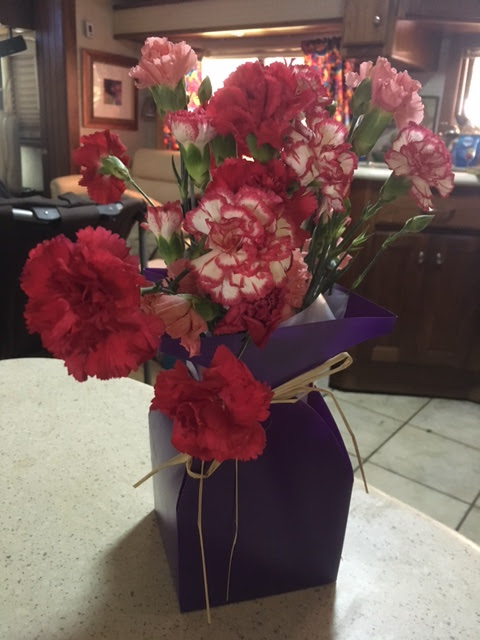 These were a surprise! At the end of the entrance road to the field Lola and I met a man named Alan. He has a really tidy area and just comes on weekends and as we go by we chat. Lola barked once at him but then decided he was ok and laid down by me to wait til I finished gabbing. Later that day Roger took the boys to the field and when he returned he was carrying the flowers in their cool plastic, purple vase.  First surprised that Roger found flowers in the cool, purple vase out walking in the campground then surprised to hear that Alan gave him the flowers for me. They were meant for someone else, oh, second hand flowers, lol, but he wasn't seeing the person and was about to leave the grounds. I was thrilled.  He did leave before I could thank him but hopefully he will be back this weekend!

Time to do some laundry, painting and sweep the sand out of the coach. 😮 This afternoon we are going to the sunflower festival. We drove by yesterday and the flowers have filled out even more. I'll post tonight or definitely tomorrow. So very excited to go walk through them!

Have a great day and see you again soon!

Warmly,
Sheila
Posted by Sheila Wedegis at 11:35 AM